​Official practice and there was a palpable trepidation in the air. It was overcast at the Glasgow BMX Centre and there was a side wind, a significant side wind. A lot of brakes were being pulled at the bottom of the 8m hill, the first jump in Glasgow is no joke, in fact the entire track is big, steep, and technical, it would require full concentration at full speed!

While some riders just let go and went for it at the bottom of the hill, a significant number of the world’s best looked concerned, certainly not confident. The opening rounds of the 2022 UCI World Cup in Scotland were going to be interesting …

Overnight the BMX gods were consulted, and they capitulated. Saturday, round one … the sun emerged, the side wind was gone, riders looked happier. The Knightswood Park facility was transformed in the sun, sculpted, and pruned to perfection. It’s easily one of the most impressive looking tracks on the planet … but still big, steep, and technical, it had the potential to chew up and spit out the unexpecting rider. 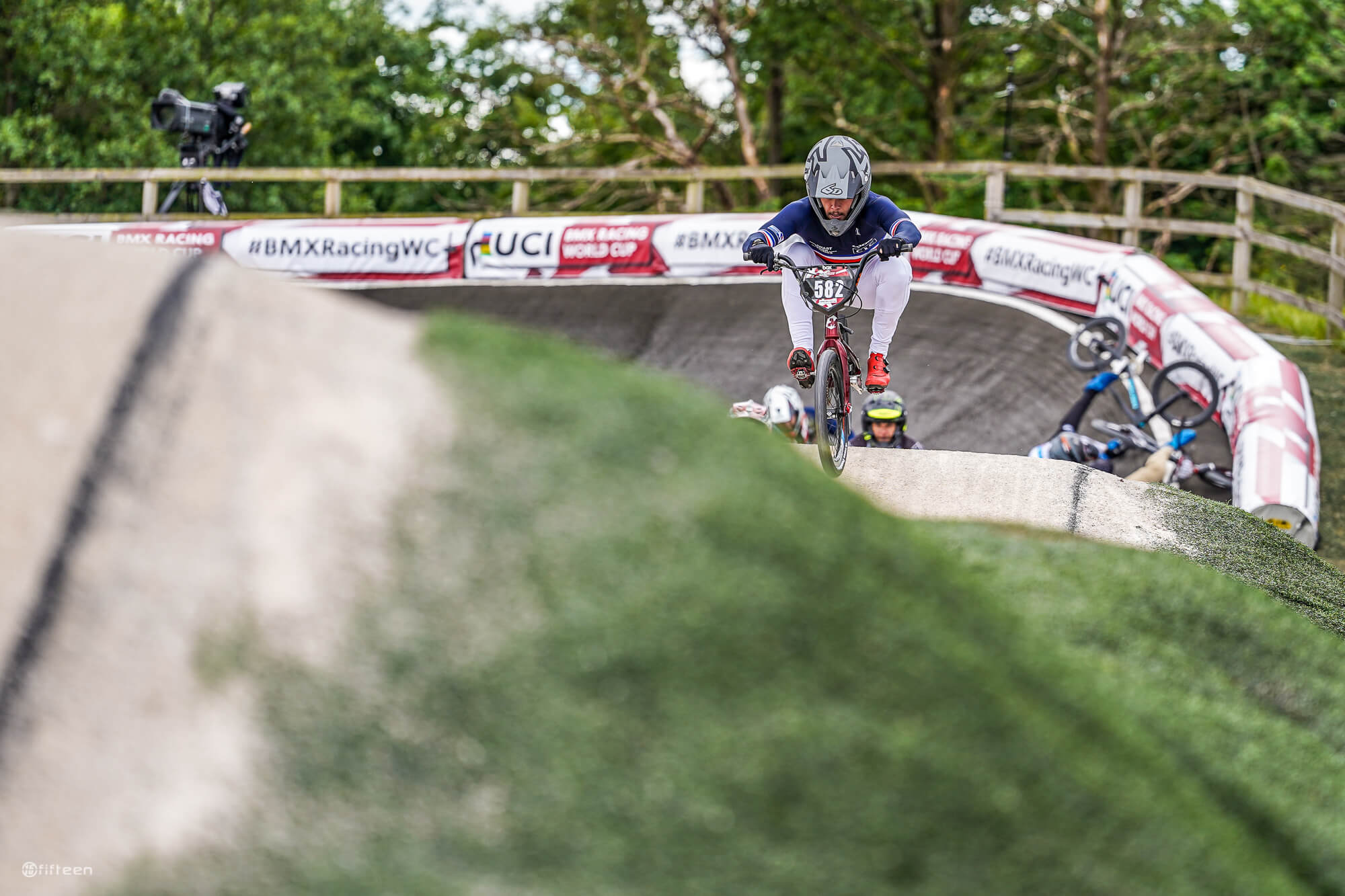 Both the Under 23 Men and Women’s classes had bigger entries than their Elite counterparts, 82 men and 29 women, and provided a wealth of racing entertainment. Other than New Zealand’s Rico Bearman, Belgium’s Wannes Magdelijns and occasional flashes of brilliance from Team GB’s Matthew Gilston, the French, as you would guess, dominated the U23 Men’s class. Day one saw five of them in the final, and they finished one to five with Dylan Gobert, Leo Garoyan and Hugo Marszalek taking the podium spots in that order, after a first straight incident essentially took out the non-French contingent. The U23 Women’s class was controlled from the get-go by Malene Sorensen from Denmark, until the final rolled around! Canada’s Molly Simpson, from lane 2 got the perfect start, leaving Sorensen chasing until the final jump on the fourth straight were she finally made the pass to take the win. Switzerland’s Thalya Burford took the third spot. 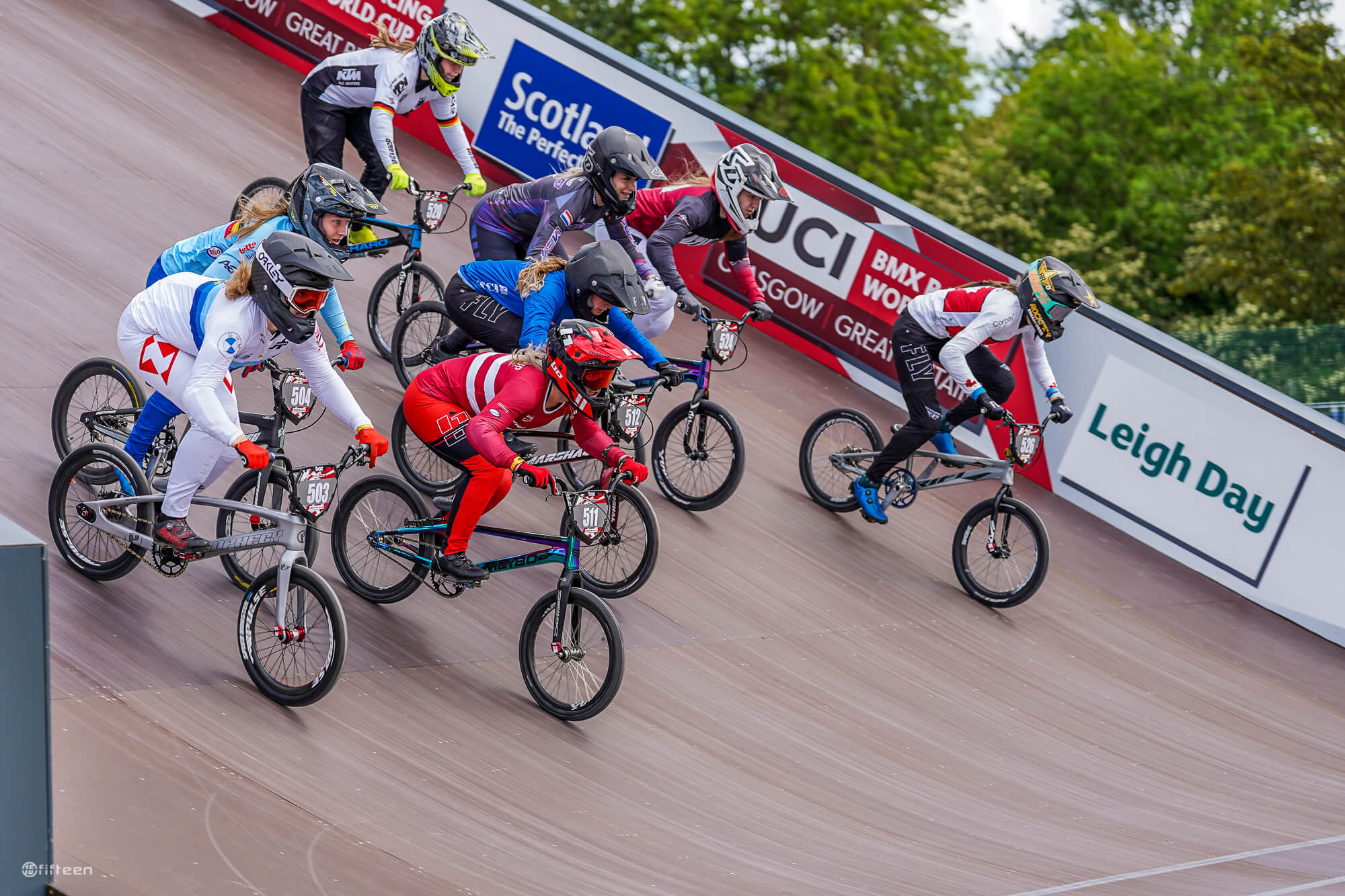 With only 19 Elite Women in Glasgow, it would only take three laps to lift the trophy, which arguably would increase the tension in the pits, less time to read your rivals, less time to settle in.  Laura Smulders, Zoe Claessens and Team GBs Olympic Champion, Bethany Shriever all dominated the early rounds on day one. The semi-finals saw some unexpected exits for Pajon and Stancil, but Smulders, Shriever and Claessens all looked fast. When the gate dropped in the final it was Shriever who briefly got her wheel in front from lane four but by the end of the first straight it was the experience of Smulders that led the way with only Claessens hanging on. Bethany got consumed in the first turn and lost all momentum leaving the two leaders to pull further and further away … World Cup win number 24 for Laura, let that sink in, 24! Judy Baauw took third in an ever-increasing podium count for her. After the final, a jubilant Smulders exclaimed ‘I killed it in that final … actually, I’m a bit surprised by myself … the lap was perfect, I’m super happy!’ 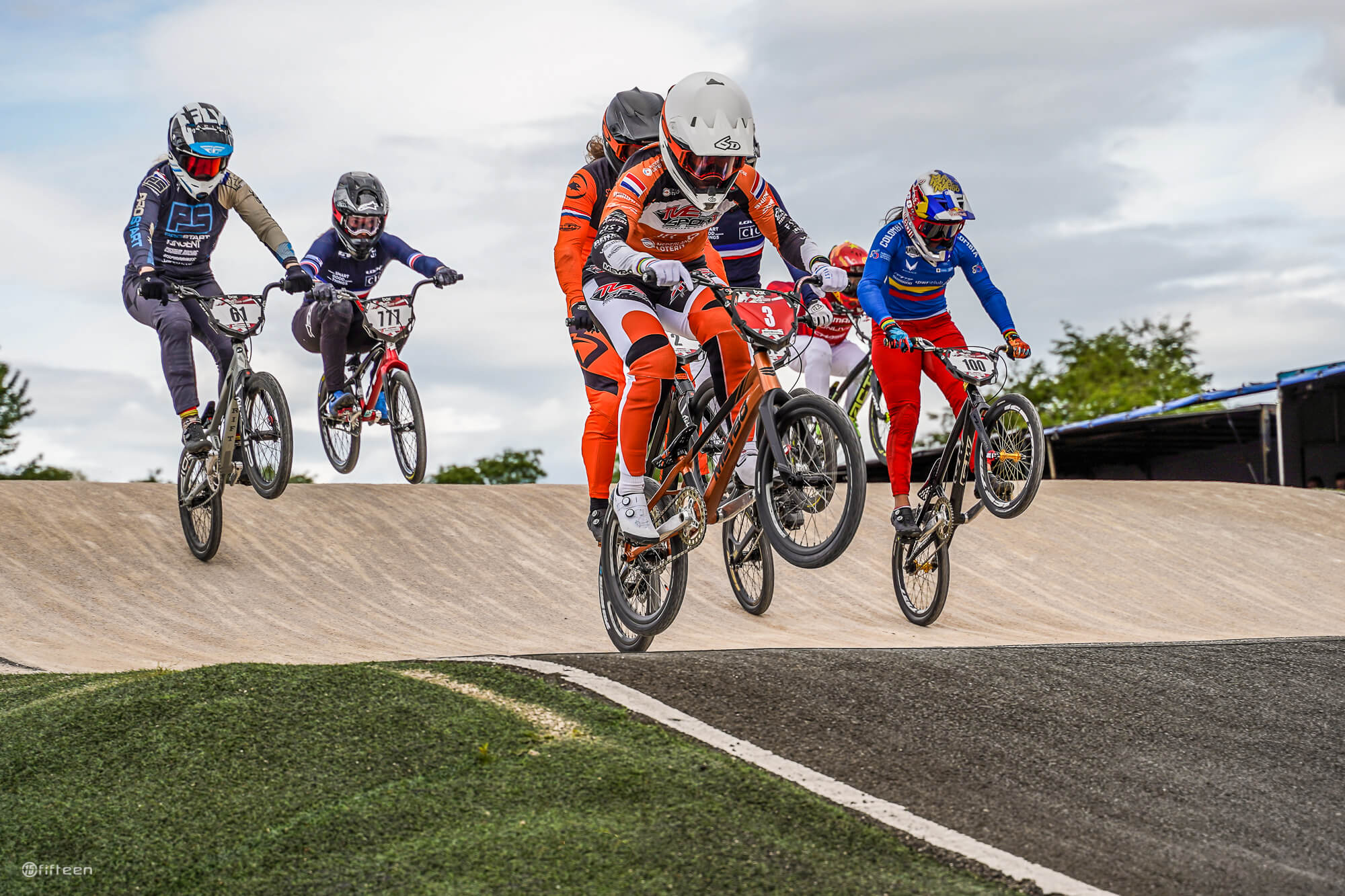 The Elite Men’s class was stacked, as per usual, with the exception of Niek Kimmann who’s taking some deserved time away. The list of who was operating at full speed is too long to delve into but just think the French, most of the French, all the French, Andre, Mayet, Clerte, Rencurel, Pilard … Colombia’s Diego Arboleda looked impressive despite nearly falling victim to the wind on Friday and Sharrock … Sharrock had the track dialled! Butti too! Kye Whyte didn’t look like he was at peak Kye, but the ‘professional professional’ was making it happen. Izaac Kennedy looked fast too but went out in the quarters, the track claimed others too, a slight lapse in concentration and you were ejected. When the gate in the final dropped it was Diego from lane two, Whyte had a shocker and was last at the bottom of the hill, Andre hadn’t fared much better. Only Mayet was keeping pace with Diego. Somehow Sylvain turned all his experience into contention by the first turn exit and Kye was making moves too but slipped back again to fifth. By the final turn Sylvain had stamped his authority on second but the crowd was going wild for Kye who was making up ground again quickly, fifth, fourth … third. But it was all about the Colombian, ‘I feel good, I feel strong, yea, it was a good day today’ … it certainly was. Amazing!

The weather on Day two was still playing ball … not as warm as Saturday but still no wind! The stands were sold out, and with both Max Cluer and Neil Stewart on the mics egging the fans on we were in for some high energy atmosphere, especially for the local talent. Round two turned out to be more erratic, more chaotic … more exciting … culminating in one of the craziest finals we’ve ever seen! 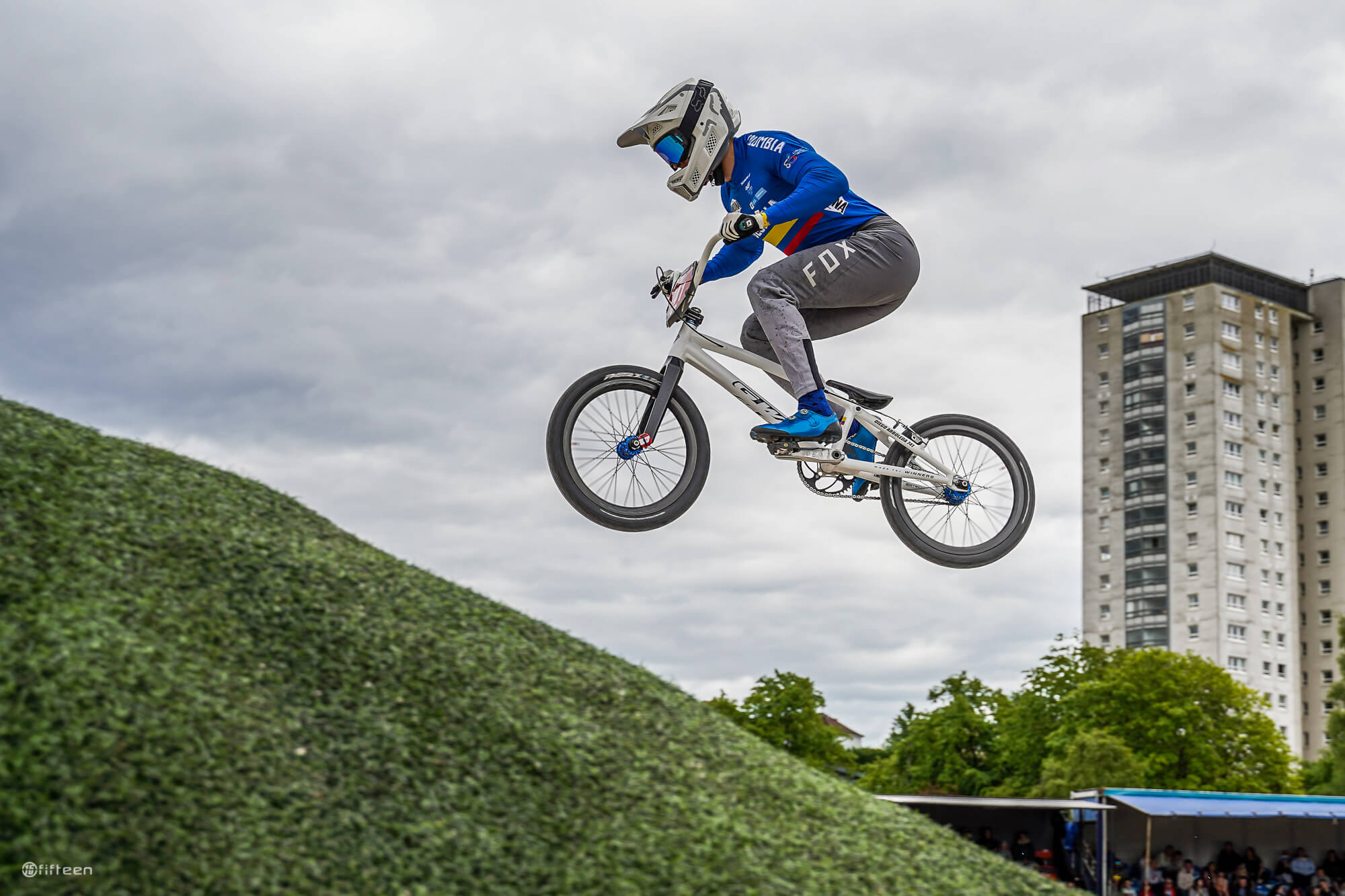 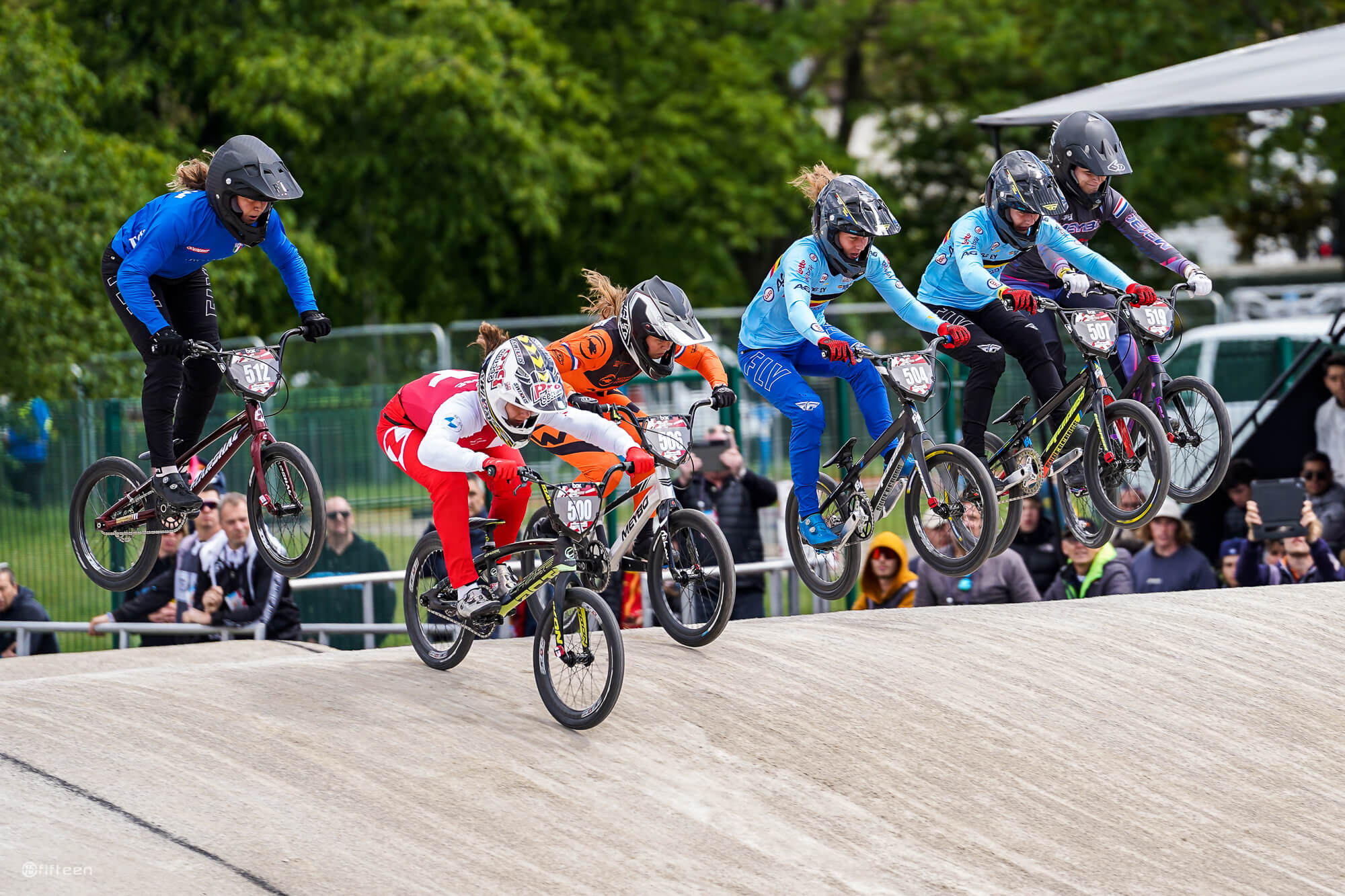 Before the chaos, the U23 Women where mostly in control. Malene Sorensen was dominating after her win on day one, with five or six bike lengths lead in her semi. The Red Bull Pump Track World Champion, Aiko Gommers was having a much better day and worked her way into the final. Surprisingly, Molly Simpson misjudged the gate in her semi and couldn’t make up the ground. When the final gate dropped, the favourite, Sorensen, instantly got swamped leaving Switzerland’s Thalya Burford room to open up … she led all the way to the line. Aiko was dead last going into turn one but fourth coming out … then third, then second on the line. Japan’s Tanno took third. 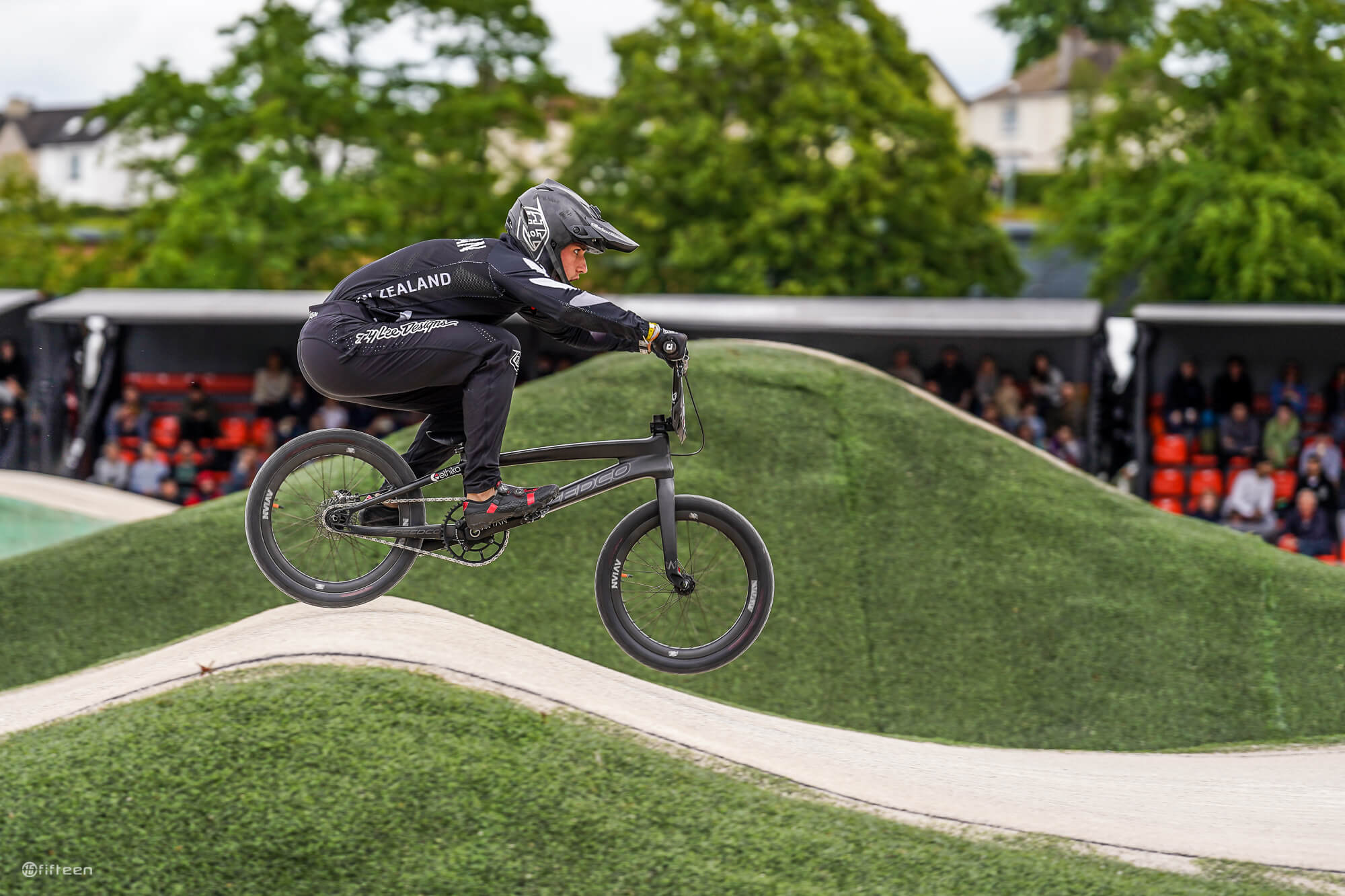 The U23 Men were going to script until semi-final number two where Rico Bearman had a bad gate, last to third, to sixth, to fourth on the line! He had gate seven when the final rolled around and lead from the start, hunted by the French all the way to the line. Bearman, Garoyan, Lui Hin Tsan!

All eyes were on Laura Smulders on Sunday. Could she get her 25th World Cup win? The home crowd wanted Beth, obviously. Laura looked comfortable and eased her way into the final from her semi. The Olympic Champion was also looking comfortable but a little bobble on the third straight left the door open for Zoe to pass Beth on the line.

Australia’s Saya Sakakibara got shot out of a canon when the gate dropped in the final but just couldn’t get over quick enough to cut off Shreiver. Somehow Smulders held her ground and emerged in second place from turn one, but the Olympic Champion was gone, three bike lengths ahead. Another small bobble on the third straight and Smulders was gaining ground … quickly. Photo finish! 25! Wow! Smulders, Shreiver, Sakakibara! We’ve run out of things to say about Laura Smulders when it comes to World Cups. It’s very possible that by the time Papendal finishes on the 12th June all we might have to say is, 27 … 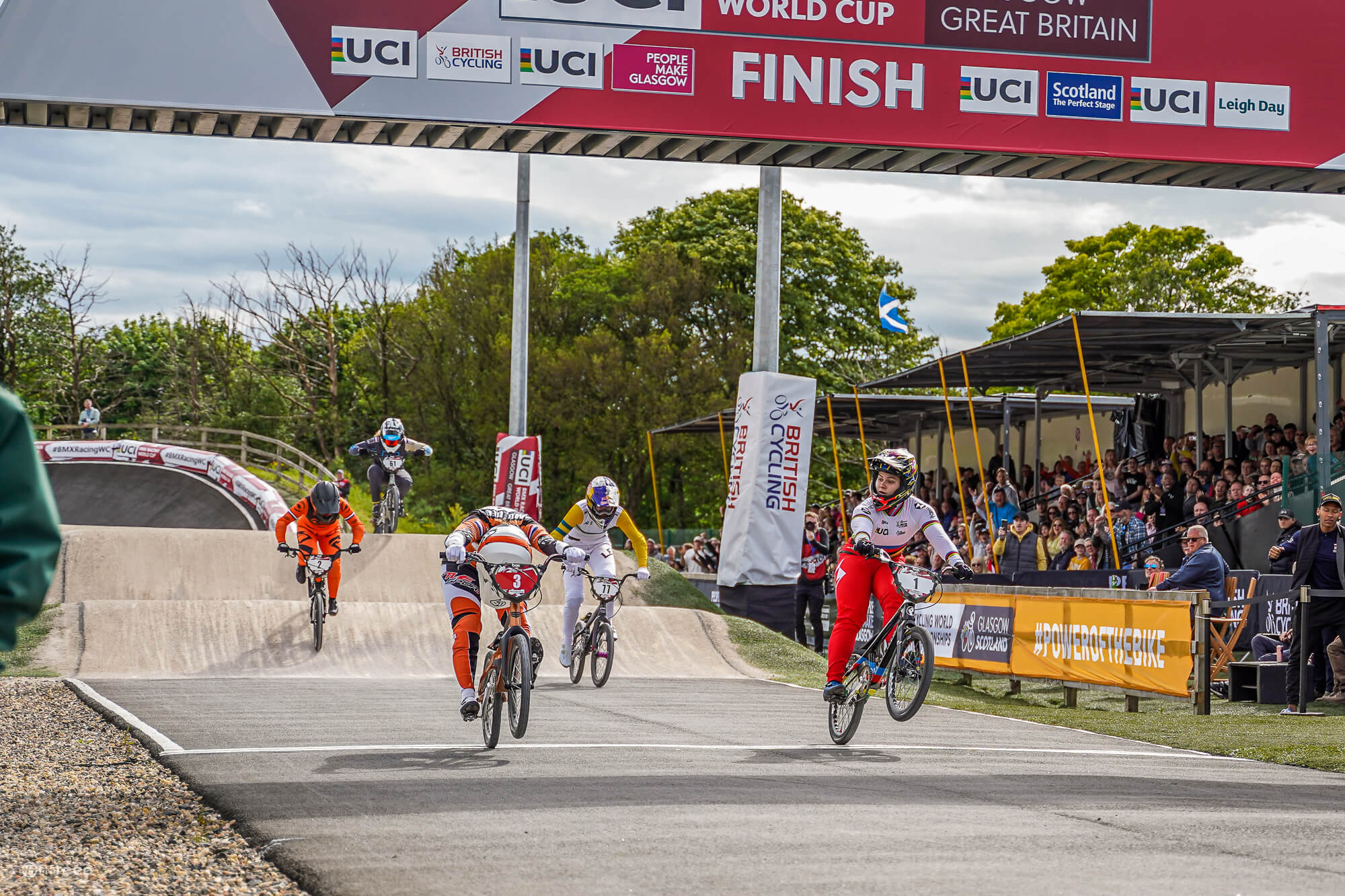 The Elite Men put on a show … but a large part of the show was crazy! Round one winner Diego Arboleda fluffed his gate in his qualifying moto meaning he had to qualify through the LCQ, his day got quicker from there. Eddy Clerte was holding onto the fastest lap of the day until he went down hard all on his own while leading his 1/8. If just a few things start clicking for Eddy, we think the podiums will start coming thick and fast. Jeremy Rencurel looked good on day one, but he had found another gear for Sunday … our Saturday night prediction was looking promising. 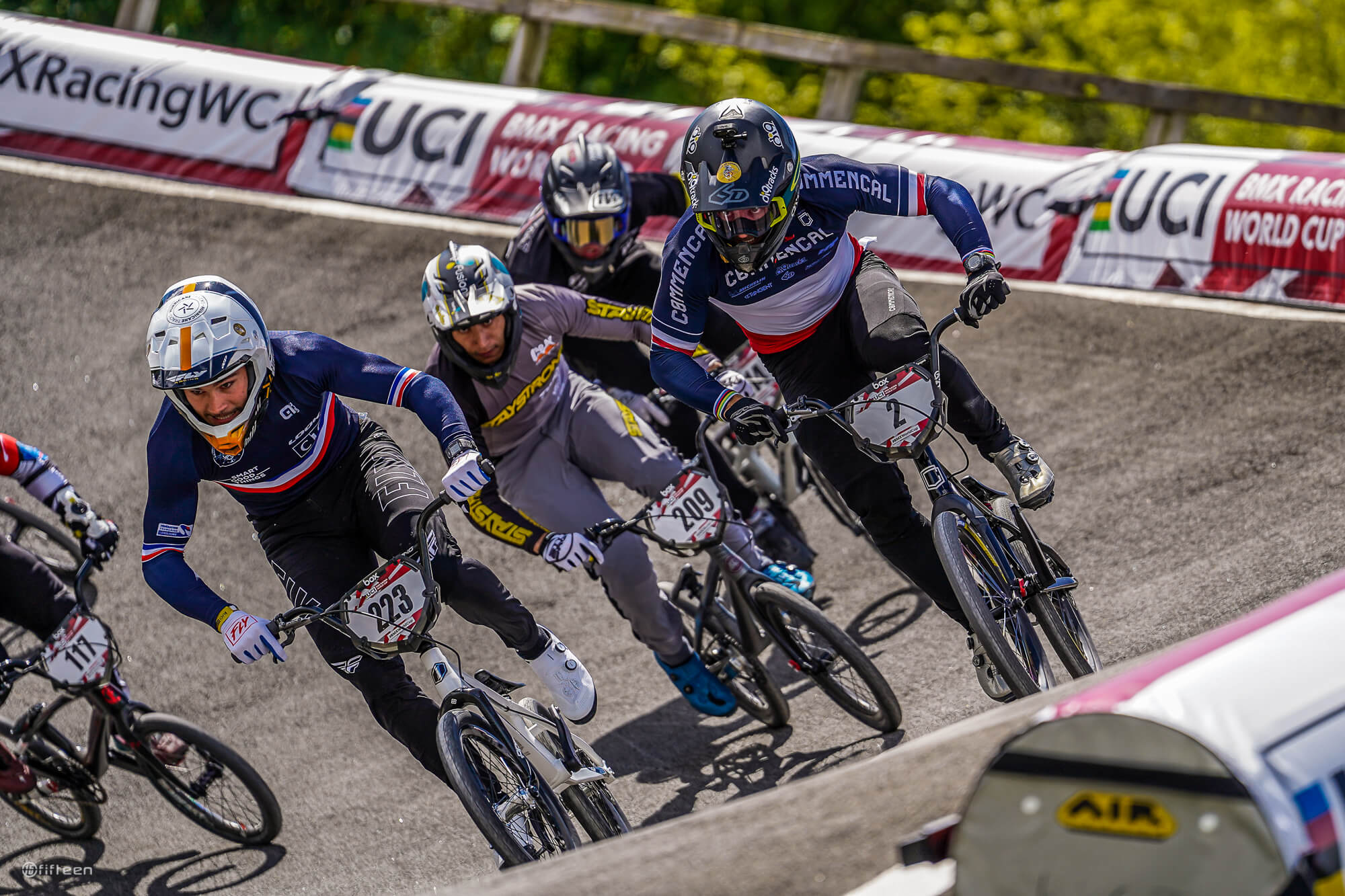 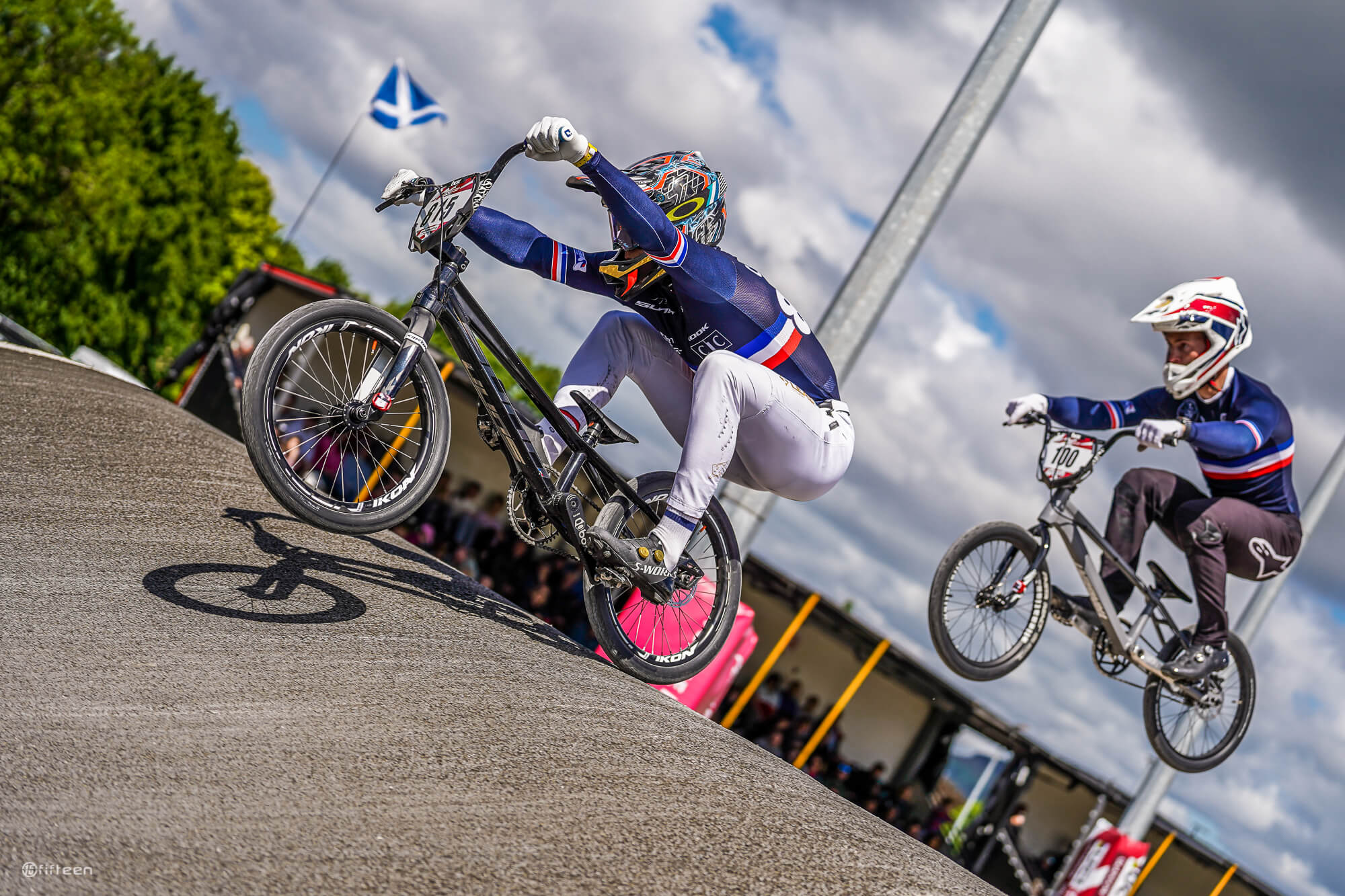 The semis is when it got hectic. Rencurel left the other seven for dead on the gate in semi one, Van Der Burg tucked in behind, Sharrock went from seventh to third in turn one, Bias from eighth to seventh. With Mayet on the bubble, Bias was moving through the pack, seventh to sixth, sixth to fifth … there’s no passing in supercross, right? Bias missed out on his first World Cup final in a photo finish, but we think one is coming. Semi-final two got wild at the end of the first straight. Carlos Ramirez came unstuck on the last jump, bounced six feet to his left between two riders and took out his fellow Colombian, Garcia. Both got shredded when they hit the asphalt! Kennedy came out of the corner in first followed by Butti, Arboleda and Andre …Izaac fluffed the last straight and was passed by Cedric on the line, while Diego and Sylvain swapped positions more than once … but remember, there is no passing in supercross. If the semis were hectic the final was all out chaotic! Arboleda briefly looked like the double was on until the end of the short first straight, where he came together with Van Der Burg taking out both Sharrock and Mayet in the process. Only four riders left. At the time of impact Rencurel had nudged his wheel into first place and he was gone. Butti, Kennedy, and Sylvain somehow avoided the pile up and where in a battle for the podium. Kennedy caught Butti at the end of the second straight where they may have touched … Butti went down hard! Three left. Kennedy was gaining fast, maybe too fast for the technical track … he lost it on the last straight in a spectacular somersault. Only two left. Rencurel grabbed his first World Cup win and Sylvain grabbed yet another podium. Seven seconds later Kennedy crossed the line in third. Nuts. 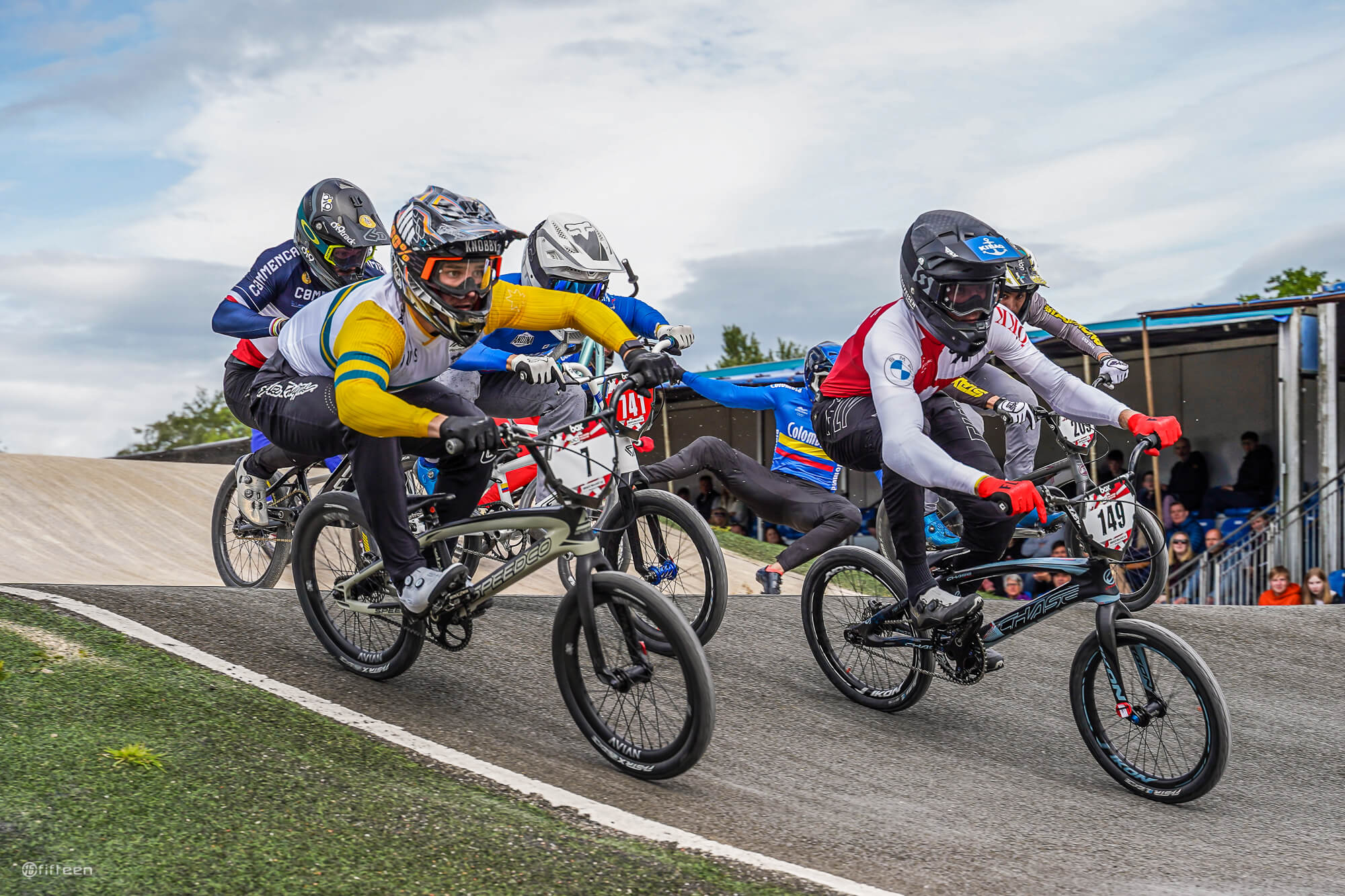 Papendal is next, always brilliant but it now has to live up to the Glasgow hype. Will Sylvain and Laura leave Papendal with the coveted red leaders’ plates that they arrived with? Can Laura rack up win number 26 on the circuit? Can the Dutch men tame the French at home? Will we see the return of Niek? Tune in on June 11th and 12th for Rounds 3 and 4 of the 2022 UCI BMX World Cup … we can’t wait! 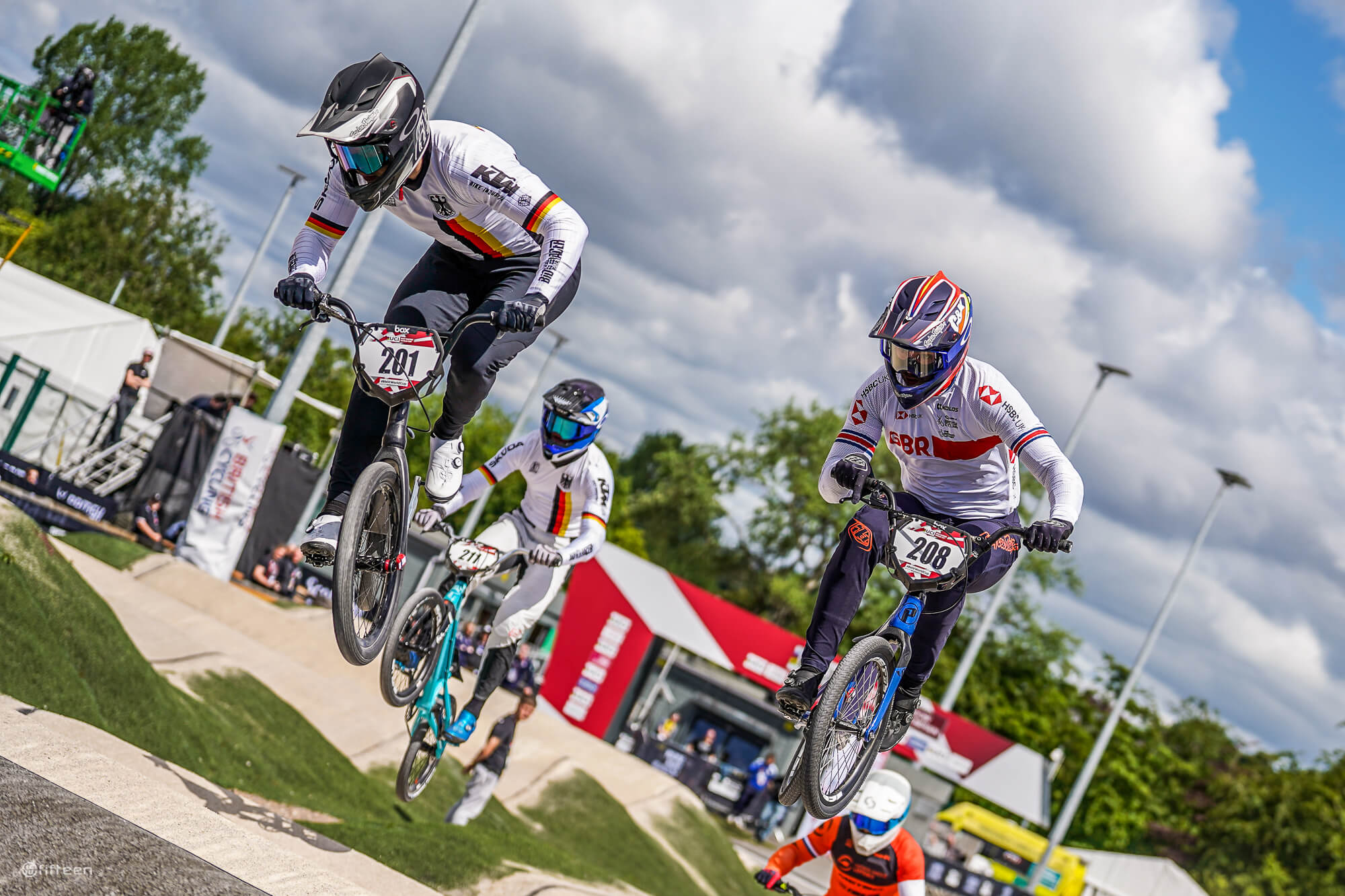