Charlotte Green, one of the UK’s fastest Elite women will be in Colombia this summer for the 2016 UCI BMX World Championships but she won’t take to the track because of recent British Cycling decisions. Decisions that not only prevent her and others racing at the event but also deny Great Britain a chance of an Elite woman at the Rio Olympics … a real possibility if you study the UCI women’s points.

We recently caught up with Charlotte to ask her opinion on the BC situation*, to find out about her about her new team, Crucial BMX and that beautiful new yellow YESS Elite, her plans for the year and some other stuff too …

*this interview was post BC Elite BMX Team announcement but pre other BC issues. 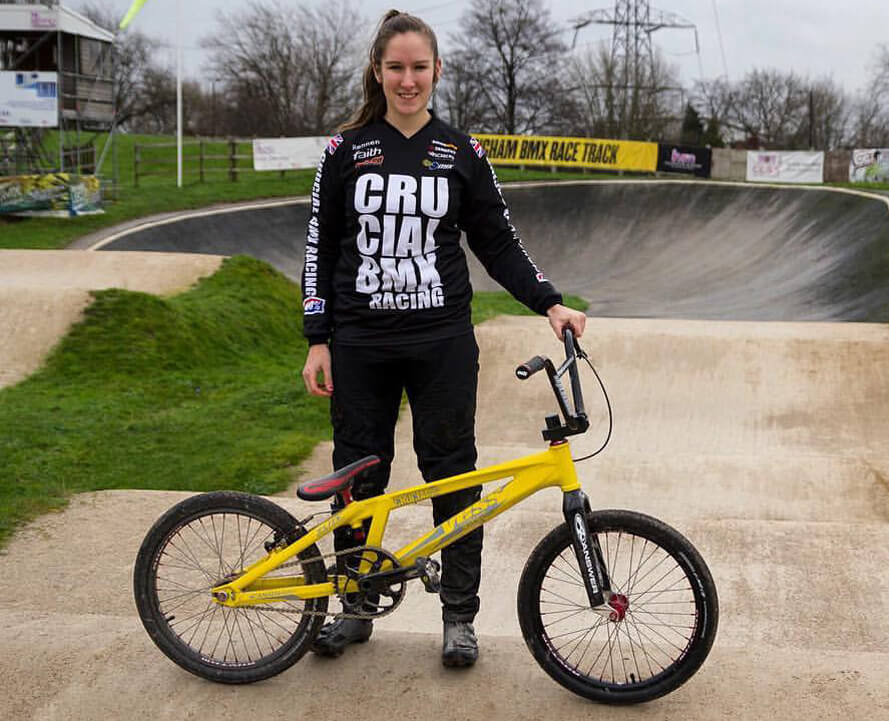 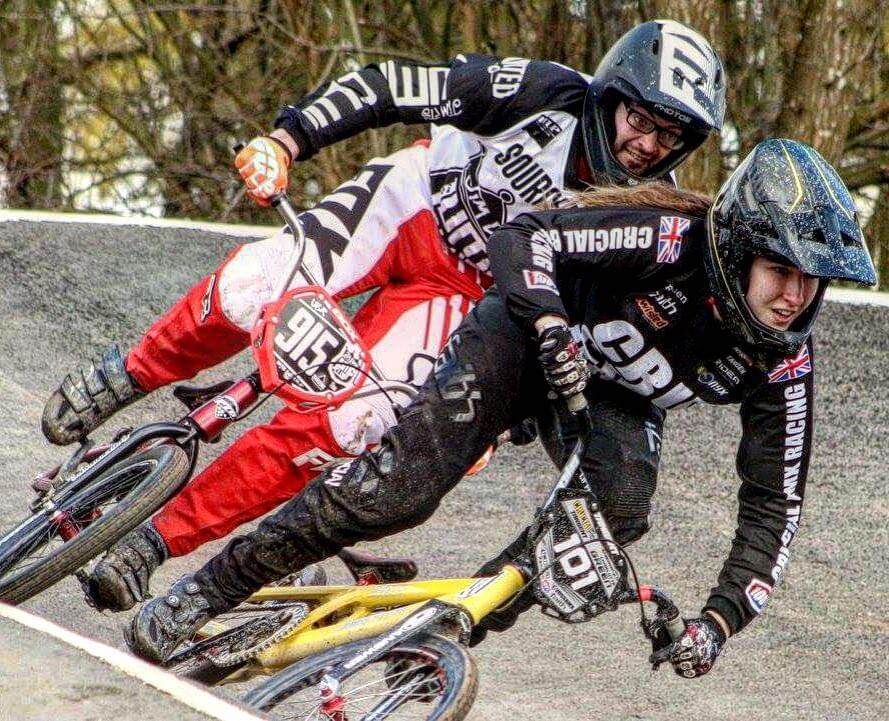 15: Any idea of the total weight or the new bike or do you care about that?

Charlotte: I do care I just haven’t weighed it!

15: You have gone from a carbon frame to an alloy one, do you feel a difference in stiffness? Did it take you long to adjust to the new set up?

Charlotte: When I first got on my carbon I couldn’t believe the difference between the two. As a girl I don’t really pick up on such specifics so for me it was really surprising to feel. When I jumped back on to an alloy I surprised myself again as believe it or not it felt even stiffer than the carbon. It took a while to adjust to as the GT geometry is so different to the YESS. The bottom bracket height is higher on the YESS so for me it took a while, but once I had ridden it for a couple sessions the bike felt amazing and I wouldn’t change it for the world!

Charlotte: I change my gearing quite regularly for training purposes but not as much for racing. It benefits me well to keep the gearing varied throughout my training as your body/legs need to be able to adapt to any track condition.

15: You’ve joined the new Crucial BMX Team which is crammed full of talent. How’s that going so far this year?

Charlotte: The Crucial Team is a massive family that supports every single rider! They have been lovely to get to know and I can’t wait to be able to spend more time with everyone in the up and coming national races! We have so many rad people on the team and each person brings something individual and great to every gathering.

15: What are your plans for the 2016 season and beyond? Will we see you at more of the UCI Supercross World Cups this year?

Charlotte: I do certainly hope so! I have set plans to go to the last two rounds in America and undecided plans about Papendal. I’ve not ridden any of the American World Cups before so it’s something I’m looking forward to!

15: We know you’re planning on travelling to Colombia for the UCI Worlds in May, given the recent announcement from British Cycling on the Elite Worlds Team, do you think you’ll get to ride this year at the event?

Charlotte: Unfortunately I won’t be able to race due to the most recent announcements with British Cycling. The trip will still be a great one with amazing people so ill be going out to support the British guys and girls that are racing and help anyone in any way possible!

15: We’re sure you’ve seen lots of videos of the Colombia track, it looks big and technical. What do you think of the direction track design is taking?

Charlotte: I think the track looks amazing! It will defiantly test the skill levels of every single rider. The direction of track building is defiantly progressing onto bigger jumps etc. I think it’s quite hard to visualise the future of tracks as they are still getting larger. When does to big get to big? Until then everyone will just crack on and enjoy it!

15: There has been a lot of, let’s say … disbelieve, at the team announcement for the GB Worlds team from British Cycling and that no self funded athletes can  go. What are your thoughts on the current situation?

Charlotte: I think everyone has seen and expressed their thoughts on this subject matter through social media. I don’t believe it’s fair that the likes of Tre and Quillan cannot fund themselves and I hope they both get a chance to prove the selection panel wrong. I wish them all the best. 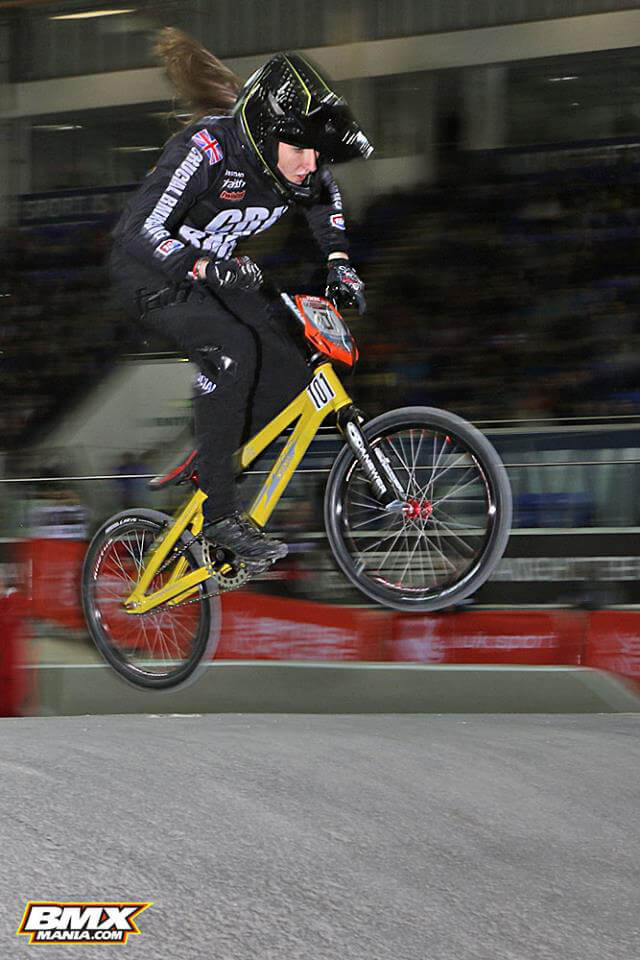 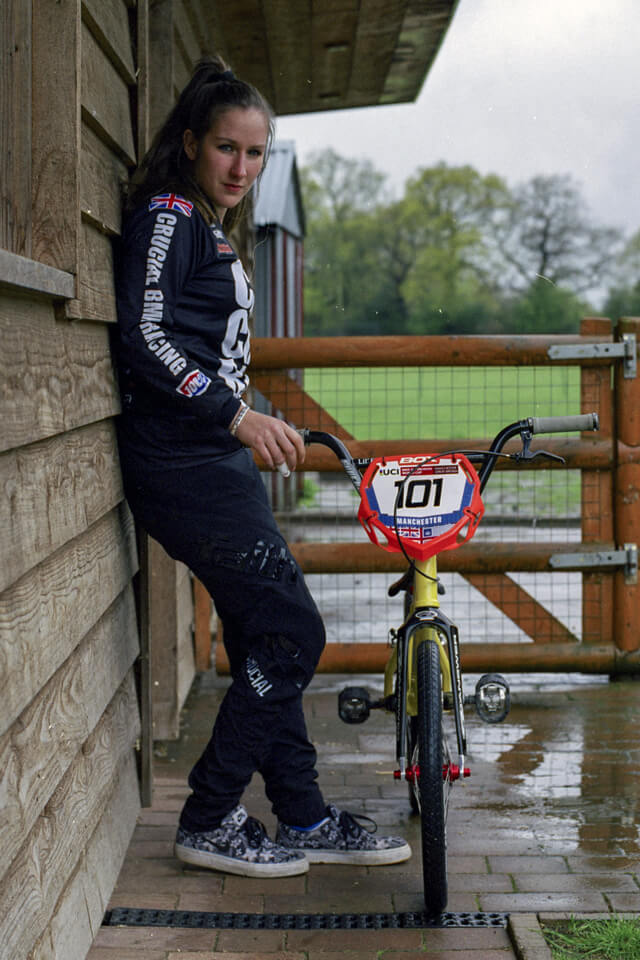 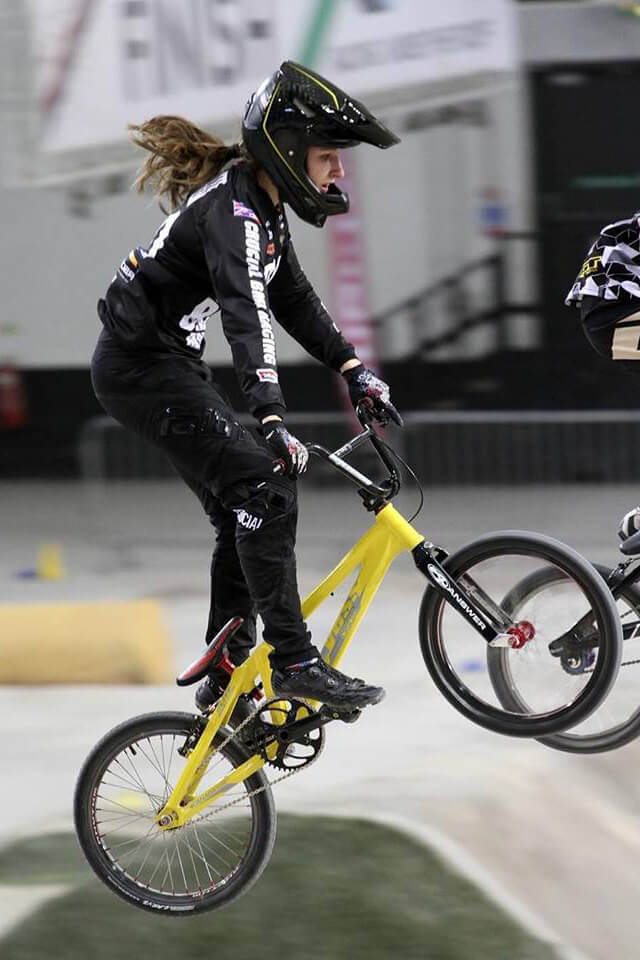 15: You left the British Cycling set up recently …  you have not been the only one. What do you think is the reason for the fast turnaround of women in the BC system?

Charlotte: I was removed from the program rather than ‘left’. My time on the program gave me so much and I don’t regret anything or any choices that I made while there. I don’t know the reasons for the turnaround of women but in the future I hope to help and give advice to the up and coming girls going into that environment.

15: The progression in women’s BMX, especially at the Elite end of things, has been huge in the last few years, it must take huge commitment and a massive amount of work to keep in mix? Are you managing your own training programs now or do you have a coach?

Charlotte: The level of girls is huge now and I have total respect for every single one of them! I am managing my own training. Myself and Billy push each other in training especially skill wise on the track. He gets me doing all sorts of things and its really progressing my technical ability.

15: How is your latest injury to your finger, How did you do it? There were so many bad crashes at the UCI SX World Cup round in Manchester this year, how do you mentally get past your crashes and injuries?

Charlotte: My finger isn’t in the best shape unfortunately! Where I have broken it is possibly the worst place to brake it. I’ve broken it at one of the joints where the tendon ends which means any movement in the joint can force the fracture to open up again back to square one. A minimum of 6 weeks in a splint is paramount which really sucks because you can break a wrist and be back racing in 4-6 weeks. Its’ frustrating as its only a finger! I did it going into the first turn alongside Caroline and Brooke. I’m not sure how it happened I just know hit the floor with some force! Haha!

15: What advice would you give to young women about to turn or considering the leap to Junior or Elite?

Charlotte: Just go enjoy yourself! And just build on your experience.

Charlotte: Hopefully after the worlds! There seems to be a bit of down time where there isn’t much racing going on so it’ll be a pleasure to head over to you guys for some Irish fun!