The Dutch National squad is packed to the brim with talent so it was almost inevitable that Judy Baauw would soon be welcomed in.  She has barely had her jersey for six months and already she is intricately entwined with the team’s success.

2018 has seen Baauw go on a rampage all over Europe and now with Baku looming, any sane person would be foolish to bet against her returning to the Netherlands with a UCI Worlds medal around her neck … so it was about time that we tracked her down … 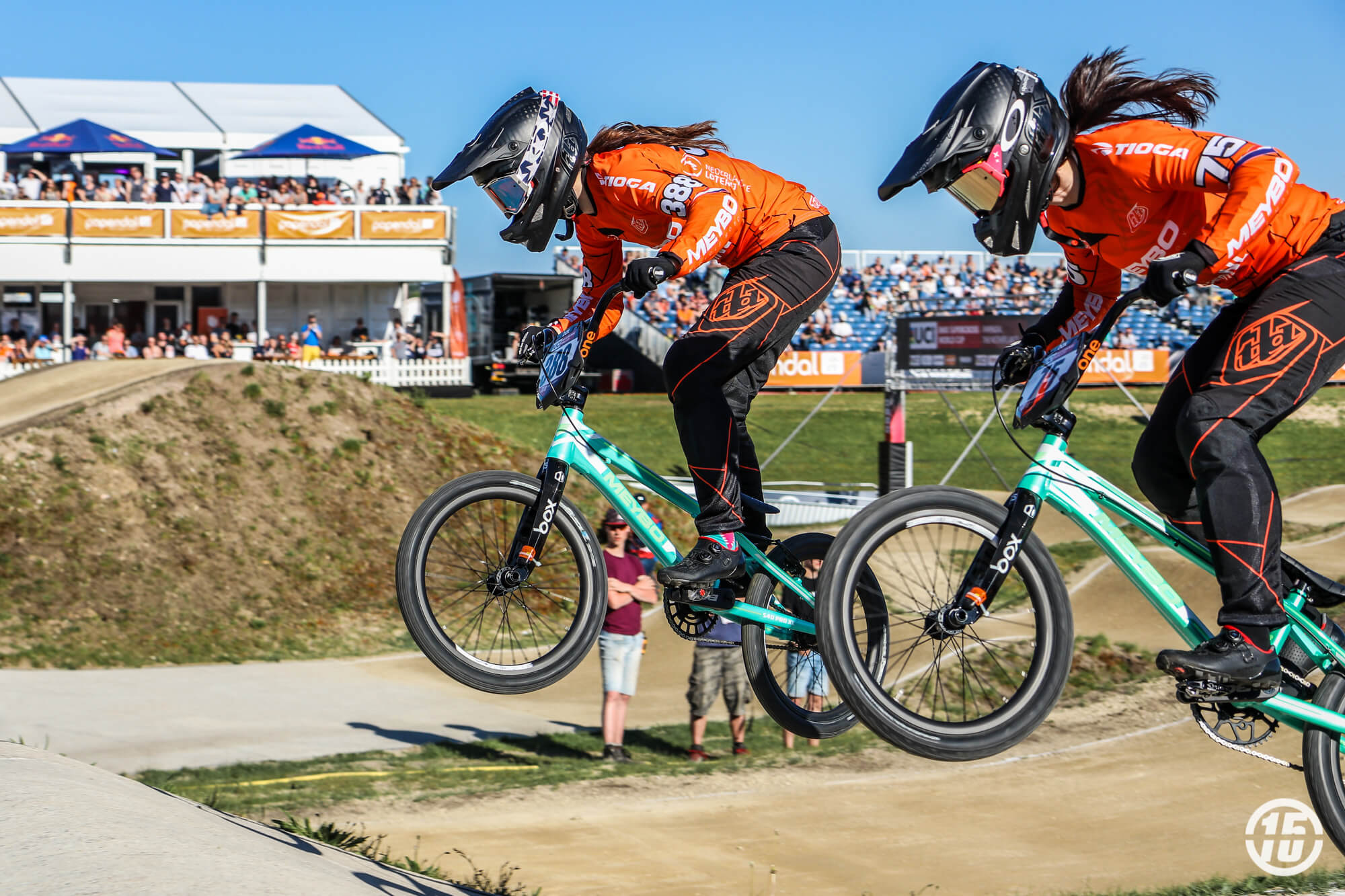 15: It would be disingenuous of us to say you have burst onto the scene this year as obviously you’ve be a fixture in Elite mains for the last couple of years but … this year just feels different to us … are we reading into something that’s not there … you seem more confident … Do you see this season as just the continued steady progression or has something … clicked?

Judy: I did well the last couple of years but this year has been really good to me so far. Showing a lot of improvement and getting consistent with the results. The biggest thing that has changed for me is the switch from the VERLU BMX Team to the Dutch National team.

15: Yea, you became part of the Dutch National squad this year, how did that come about? Clearly you’re happy in the setup, what benefits has it brought to you?

Judy: Because of my results last year Bas de Bever asked me if I wanted to join the Dutch National Team. My former coach Wilco Groenendaal told me that I can be the best of the world if we can fix some small things. The National team can provide / help me with all these things. They make sure that the only thing I have on my mind is riding my bike. Everything depends on details if you compete at the highest level of BMX. So, I decided to say yes to Bas, quit my job as a physio and continue my journey as a member of the Dutch National Team.

Judy: In a short period of time I became one of the best BMXers of the world. I was finding it hard to accept that and I saw myself less than others. After a few chats with the team coaches and staff they made me believe I can even win World Cups. Luckily the results came straight after these chats and I’m ranked 2 in the UCI world ranking right now. This is definitely a confidence boost! 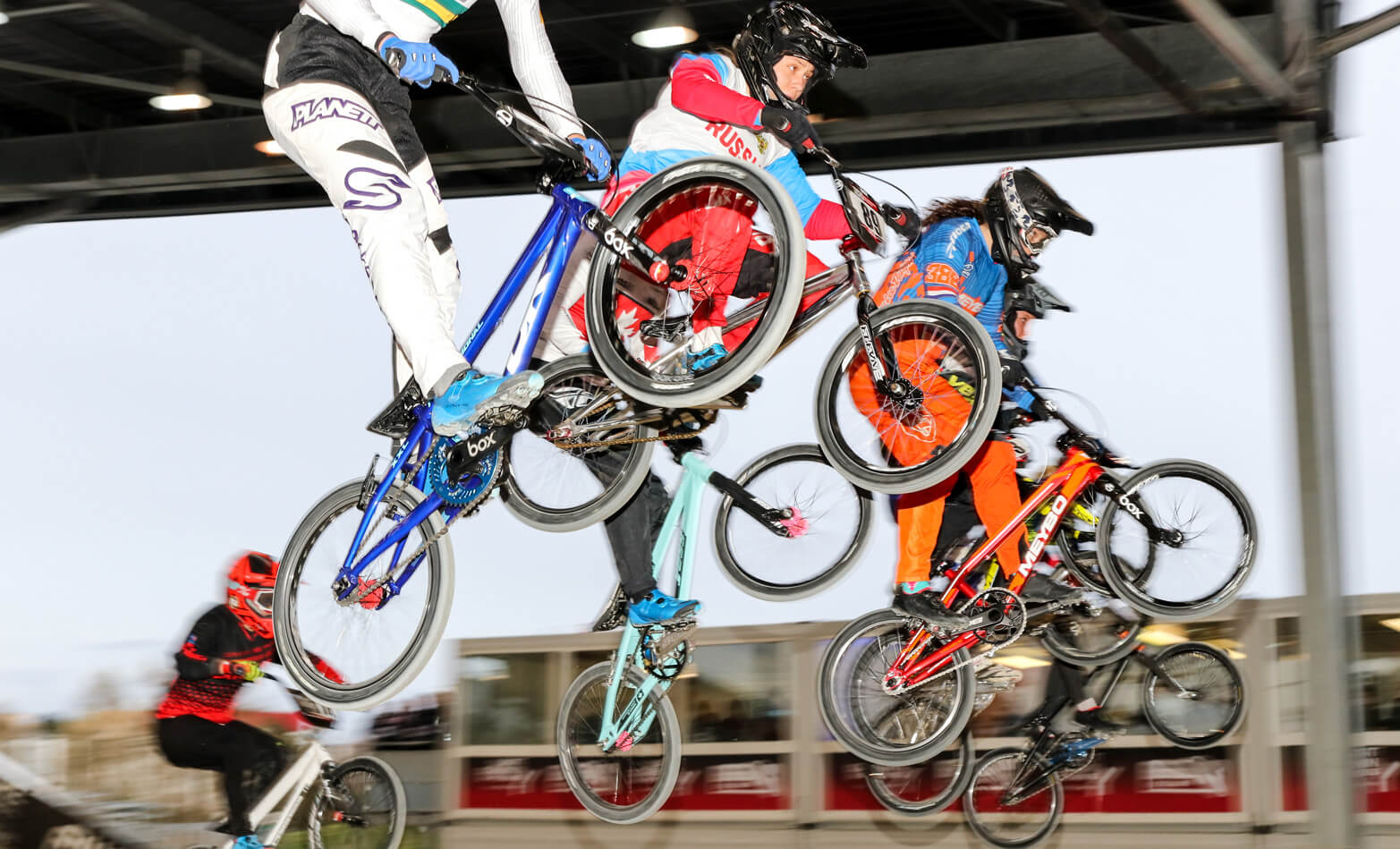 15: In Kampen it looked like you found a new gear, winning both days by a significant margin … that had to be your best weekend on a bike to that point? Where you just riding the wave all weekend there or is there lots going on behind the scenes to keep you out front?

Judy: I knew I could win Kampen if I would keep my head cool. But I had a bit of a struggle with that last part because my gates weren’t consistent during the season and I didn’t really had the confidence for the final. So, I talked with my coaches and they made sure I was confident enough to get a good gate in the final. When that happened in the final on the first day I had confidence that I could win the second day as well. From that moment I was in the flow and was keeping a cool head.

15: You then went back to Papendal and got a second behind Alise on Day 2 but even the second even felt like a first when you came back down to the last straight and the home crowd went crazy … do you remember how that moment felt?

Judy: That moment definitely felt like a win to me. Kampen was good, but not all the girls where there. It also gave me the conformation that the team switch was a step in the right direction. Racing in Papendal is always special because of the home crowd … but it’s even more special if you get a podium spot!

15: Is it harder, mentally, to race in Papendal in front of a large expectant crowd compared to the likes of Zolder?

Judy: I have to say no to this question. The crowd believes in you, they give you a little boost and energy at the right moments. And like I said every little detail matters! 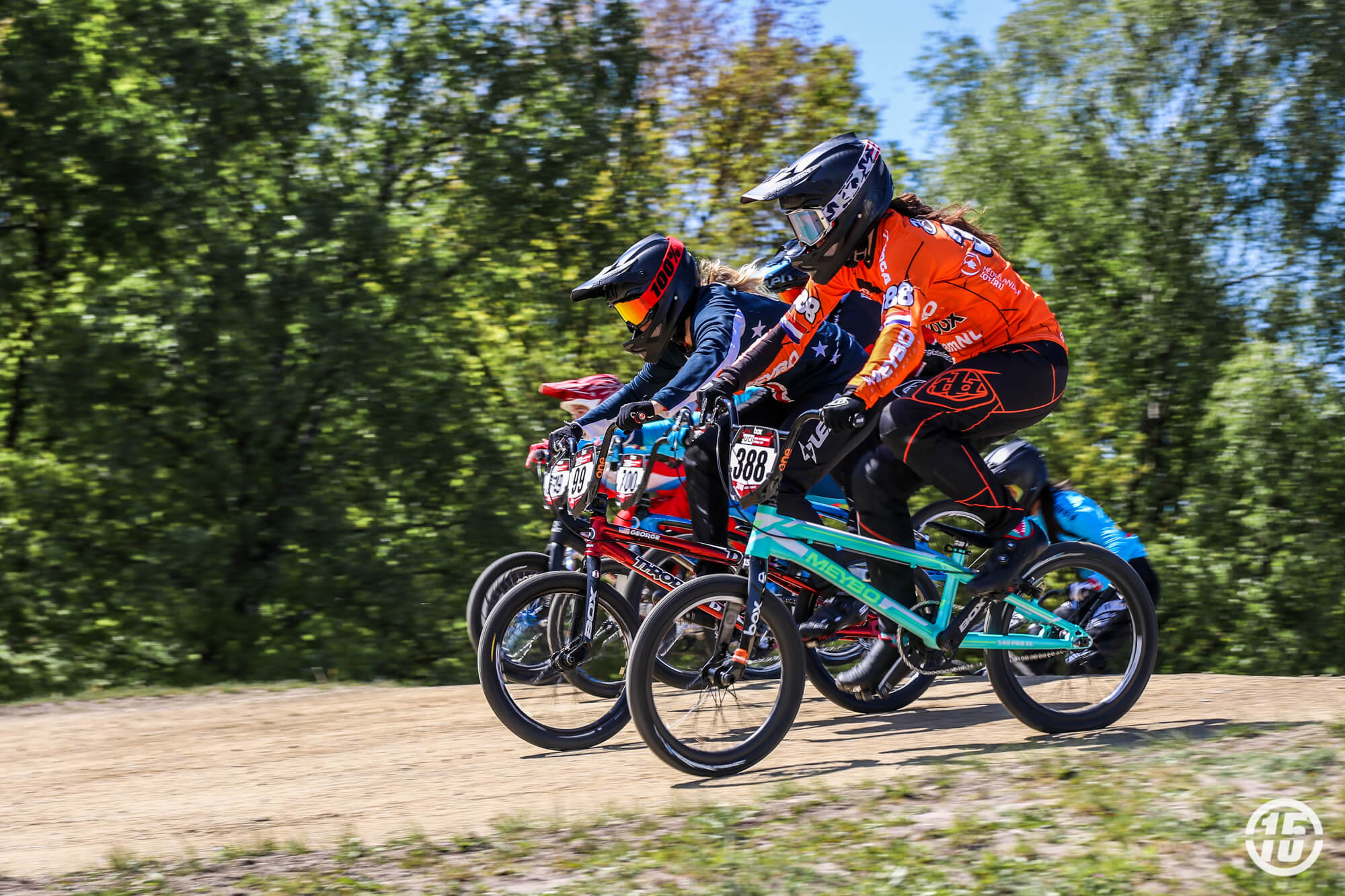 15: Zolder saw more consistent back to back racing leaving you 2nd overall in the UCI rankings going into the Baku Worlds … you must be going there with the intention of coming away with a medal?

Judy: I have only rode 2 World Championships as an Elite rider. At the beginning of the season my goal was a world cup final but after this year’s results I’m stepping my game a bit up and definitely going to aim for that podium spot!

15: When does the Dutch squad pack up and ship out to Azerbaijan? Have you ridden the track out there before? Who do you think it’s going to suit, it doesn’t look too technical …

Judy: I believe we’re leaving on the 4th of June to Baku. Funny fact, I’m doing this interview on the plain to Baku right now. Niek and me are doing a few sessions this weekend so we will get to know the track a bit better. I’ve never been there before, so I’m excited to see what the track and the city are like!

15: What’s your plan post worlds … there seems to be a little lull before the Olympic points race kicks in, which presumably will be the UCI SX rounds in Argentina?

Judy: After the Worlds I will have a few days off to give the body a bit of rest and recover before I will get back to work for the National and European Championships. Also, the preparation will start for Argentina at that moment. 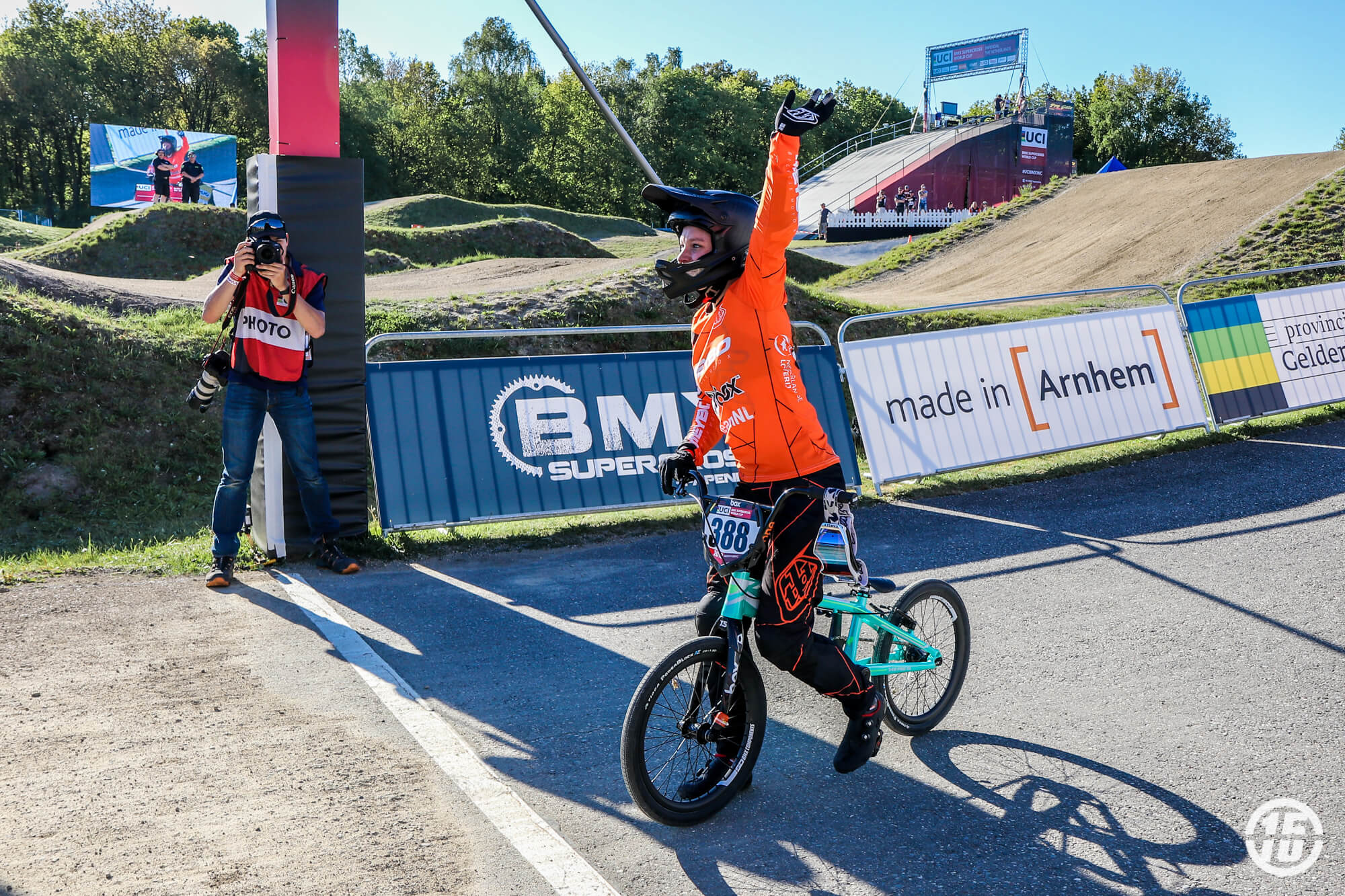 15: Does everything lead to Tokyo after Baku?

Judy: The main focus is get that qualification for the Olympics in Tokyo, stay consistent and get as many points for the country, so we have the maximum number of spots for the women.

15: The Netherlands will be aiming for 3 spots for both men and women in Tokyo … as a team, have you had the discussion as to how available spots would be allocated to riders yet? There is SO MUCH depth of talent in Dutch BMX right now …

Judy: At the moment we have 6 women in the Elite category who are aiming for a spot for the Olympics in Tokyo. We had 2 spots for Rio 2016 and hopefully we will have 3 spots for Tokyo. Even though I was in the top 16 of the UCI world ranking in 2016, it wasn’t enough to get that spot. So it’s really important to keep improving, stay consistent and keep focus because there are more girls who really want that spot as well.

15: For the younger riders out there who look up to you guys is it possible to explain how much work it takes to get from the amateur ranks to the podium at Elite level … what advice would you give to young riders looking to follow in your footsteps?

Judy: It’s really hard work, not only physically. If you see improvement every year in your riding, don’t give up! Ask pros or coaches some questions about things you struggle with and keep working on these things. And the most important thing is having fun in what you’re doing! 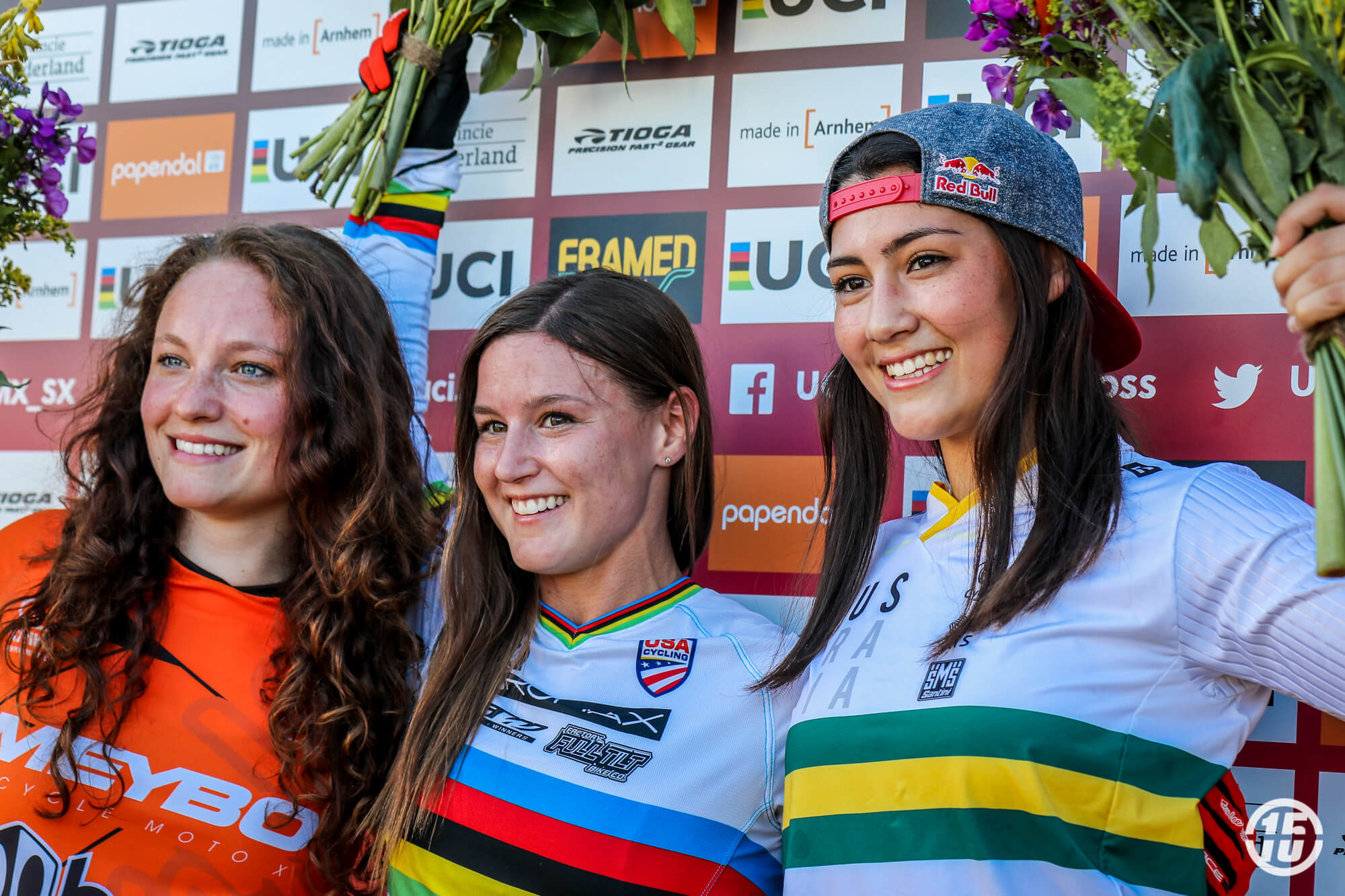