Haro’s Nic Long has been at the forefront of Elite BMX racing for an impressively long amount of time, but in his own words, he has been ‘struggling since Rio’ where for two straights everyone thought he was about to win the Olympic gold. But, BMX racing can be cruel, especially at the highest level.

Back then he was on an extra long carbon Haro frame which seemed obvious for a rider of his stature, although, there was a trend towards the longer frame back then too, especially in the world of SX tracks. It seemed to be the philosophy of the Olympicly inclined National Federations, especially in Europe.

Despite that trend, and Nic’s successes, he, at some point, decided to go back to a shorter ‘off the shelf’ Haro Citizen. We can’t remember the exact time frame but we do remember wondering about the thought process behind the decision … then Nic got a disc, and blinded by the new shiny object we forgot about the shorter frame decision, which in hindsight, was the much more interesting change …

Roll around the start of the 2019 USA BMX Pro Series in Black Mountain and Nic is back on the ‘long’ frame, that he rebuilt on a ‘hunch’ … and now we’re really interested in the whole saga again …

15: Before we get to Black mountain can we go back in time a little, to how and why the ‘long frame’ came into existence? Was it something you asked Haro for? Did someone suggest it? Was there testing? How did it all happen …

Nic: It almost all started as a joke really… Having the gate at my house, I grew up doing 100-150 gates a week on top of all my normal track stuff. I think it began cause the gate has some decent pitch but levels out super quick so if I didn’t get everything right I would wheelie a lot of the time… so I ended up having my wheel washers hanging out the back of the frame and it looked heinous. Derek Betcher called me and offered to create a longer rear end to account for it, once I got on Haro. He asked how long I wanted it and I jokingly said ‘I don’t know, 17in?‘ … and that’s how we created it.

15: How long is a ‘long Haro’? We assume it was a custom-built frame just for you?

Nic: The top tube is the same as the standard XXL at 21.75, it’s just the rear-end that’s quite a bit longer.. The standard XXL has a 15in rear-end I believe, where my “long” frame sits at 17.2in to the center. It was never a custom frame really, it has almost always been an added production frame…both aluminium and in the carbon, ironically named the ‘Long’.

15: Besides the extra length was there any other custom geometry involved?

Nic: Unless there’s a difference in the BB height, to account for the extra length… I don’t think so. I only asked for the longer wheelie bar. 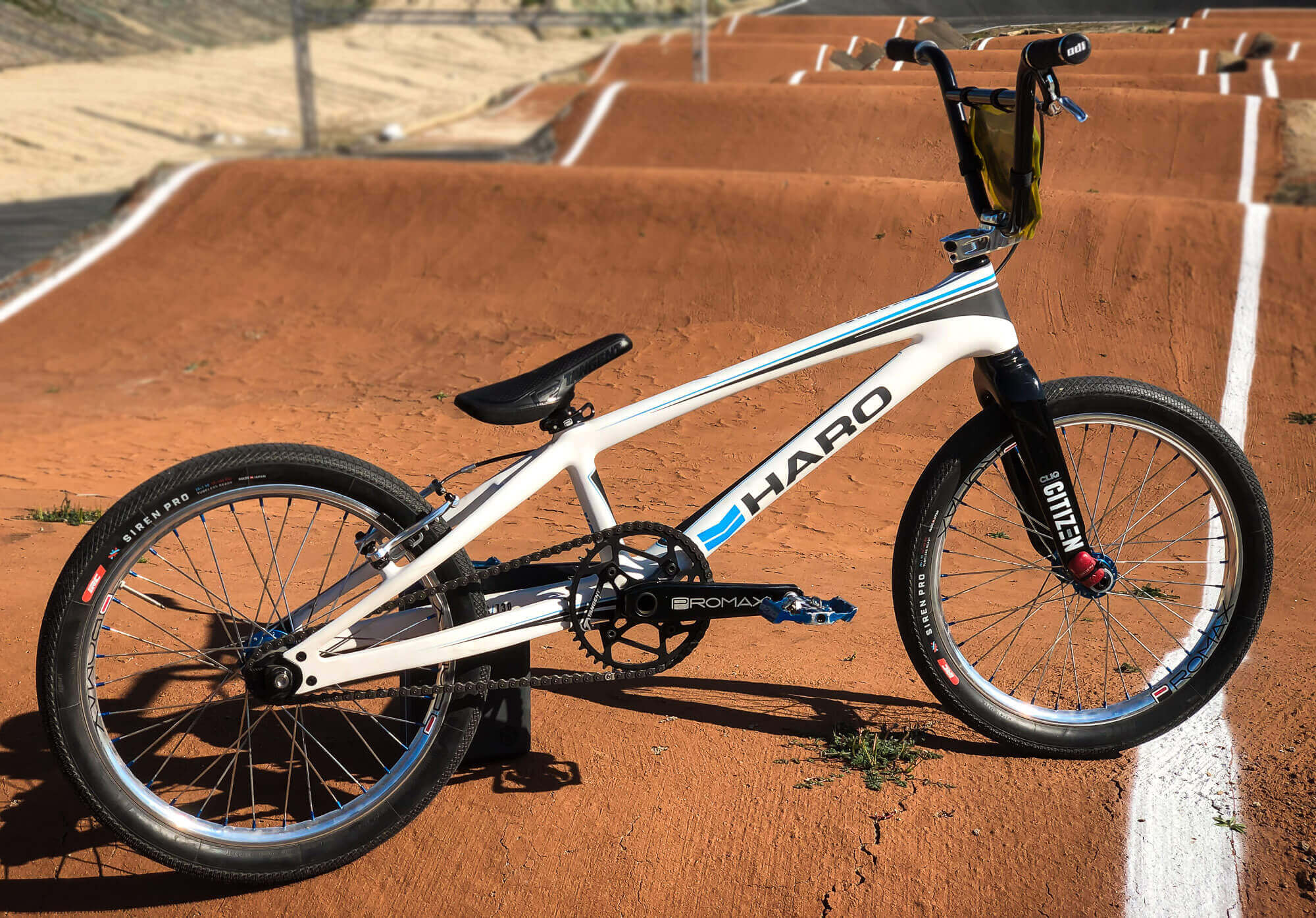 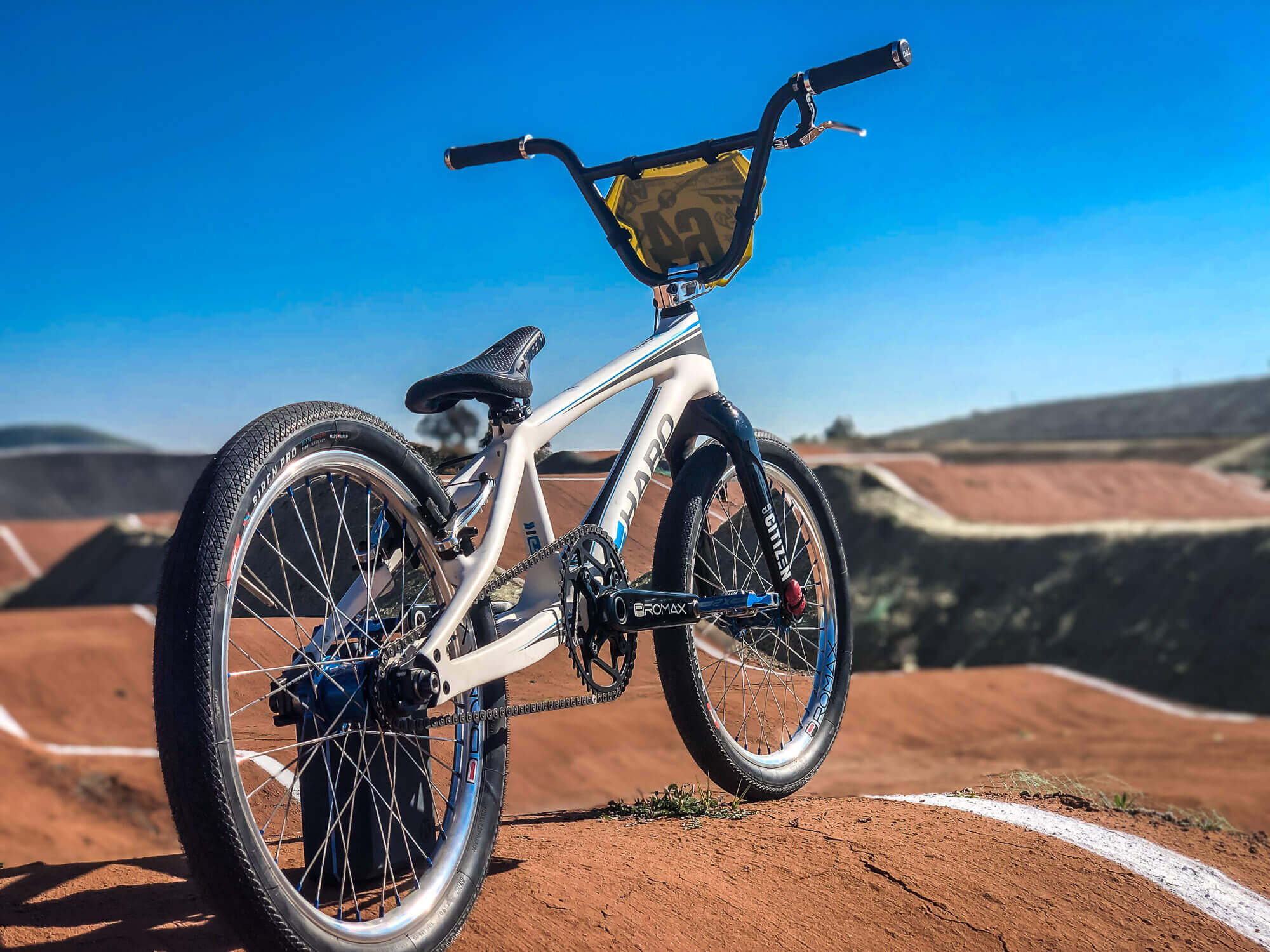 15: After having a lot of success on the ‘long’ frame, including Rio, you switched to a standard off the shelf length Citizen, what where the influencing factors that lead you to that decision? This confused us at the time, obviously you had been happy with the ‘long’ geometry … why, Nic, why?

Nic: It was a decision that followed my third back injury … if you can recall, it was 2017 and I had just podiumed day 1 at the USA BMX national in Atlanta. Day 2 however had different results, whereas I ruptured another disc in my lower back without even crashing … simply outta the gate/over the first jump. I then was travelling from Atlanta, to the 2 World Cups in Europe, and I was never able to compete … just drink all the bars dry… hahaha. So, ultimately, I just felt that maybe it was time to try something new and let the old back work a little less. That extra rear-end adds a lot of leverage and will make you work harder to get her moving. I just never seemed to have the same success without it though … so now, here we are.

15: Just out of curiosity, where is your Olympic bike now? At one point you told us you might sell it.

Nic: She’s long gone haha … I did sell it, as I had no use for it. Had I not hit my pedal and kept the lead I had in that Olympic final, then I may be typing up a different story. You can only hold on to a reminder of failure for so long, though it was a super bitchin bike. I believe it is now on display in the Powers Bike shop museum on the east coast.

15: What was the timeframe for the switch back to a standard frame … was it long after Rio? How much shorter was the new frame?

Nic: Was just before the 2017 WC season, actually while I was in route, therefor not allowing me to compete. It’s roughly a 2” difference.

15: While you’ve been ‘struggling since Rio’ you still had successes on the standard frame, did you ever feel truly comfortable on it or was there always ‘something’ not quite right?

Nic: I mean I got used to it rather quick, as I had some special drop outs made which gave me the option of making it a little longer than the standard XXL. Was able to run it around 16” if I wanted. The disc brake, first of all … I was never a fan and I really don’t like the way they look on BMX bikes… BMX is BMX, and it should keep the simple look … However, I used it during the time on the XXL because I thought those break extenders looked worse haha, stuck between a rock and a hard place, I guess. 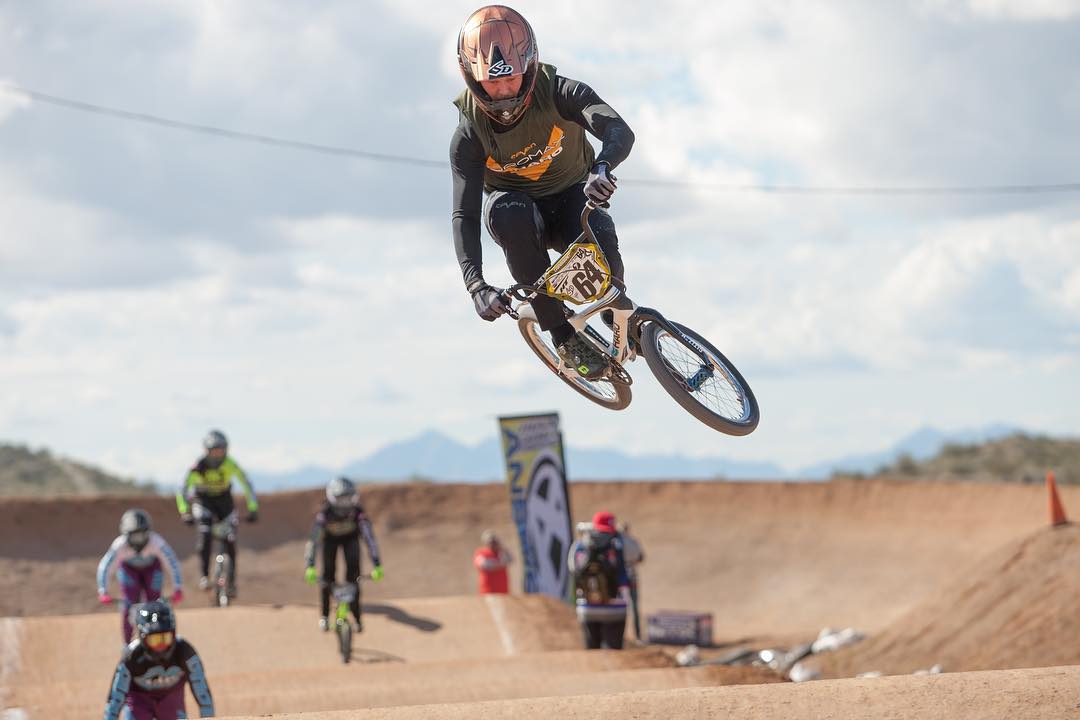 15: You rebuilt the ‘long’ frame just before the Winter Nationals and you seemed pretty happy, in fact, you are ‘100% convinced that this bike (geometry) is what’s going to keep me relevant’ … what clicked, just the bike or a lot of hard work over the winter? Explain the ‘hunch’!

Nic: Kind of a long story, but ill try to keep it brief… I feel I always work hard and put everything into my training, but was struggling with results and felt shadowed by what happened in Rio. I hoped the shorter bike was eventually going to come around, but after a year or so with not much to show … it always loomed in the back of my head that ‘My Bike’ was the right answer, but I was weary because of my back injuries. So, I continued on with it and tried training with Sam (instead of Kurt) and as much as it was awesome working with such an incredible athlete, it just wasn’t for me … we butted heads a bit, and to me it was more important to just be friends than have a coach/athlete relationship … So, ring around the rosy, I’m back to what I know worked … I’m too old and tired of trying new stuff or testing theories. Working with Kurt again, back on the ‘long’ bike, and shot gunning beers between laps (hahahaha kidding … or am I?)  It’s BMX … look good, feel good, ride good … simple as that!

15: So, what are your plans for this year? Will we see you over this side of the Atlantic at the UCI World Cups? Will Haro have you on a newly built ‘long’ Citizen?

Nic: Goal is to get back to where I know I can be. Podiums and having fun. I plan on getting to Manchester 100% as its always one of my favorite WC’s to race, then see where it goes after that. I’m confident in my abilities, and have every opportunity to get it done. A great group of sponsors and team members that know there’s as much left in the tank as I know. As far as something new from Haro, there’s something in the works for some personal colorways for both Brooke and myself… so you’ll just have to stay tuned for the sneak peeks.

15: And after that? Is Tokyo on the cards? Have you thought beyond that?

Nic: I have some contracts that go through 2020 and Tokyo has always been a goal after what happened in Rio…soon as I came across the line, and I had given everything to just give it all away. I knew I needed to keep chopping that tree. It’s the #RoadTo30, but I don’t put an expiration date on talent or hard work. I’m still here cause I fucking love BMX, and everything its given me. 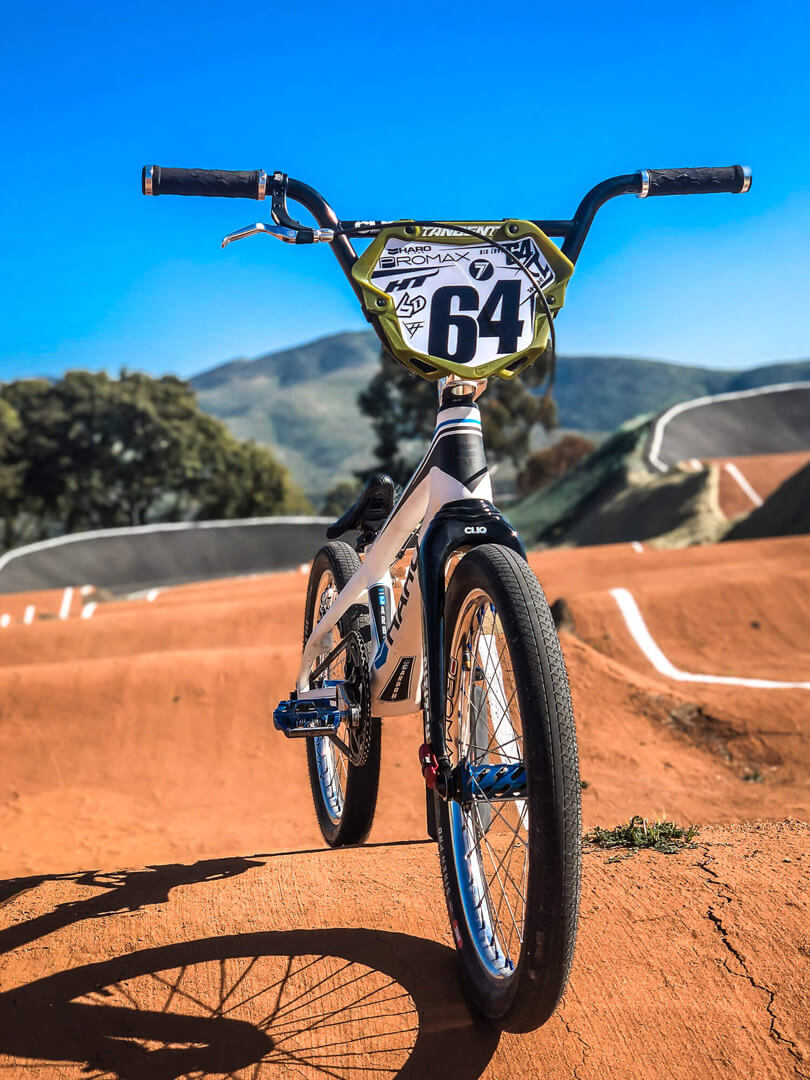 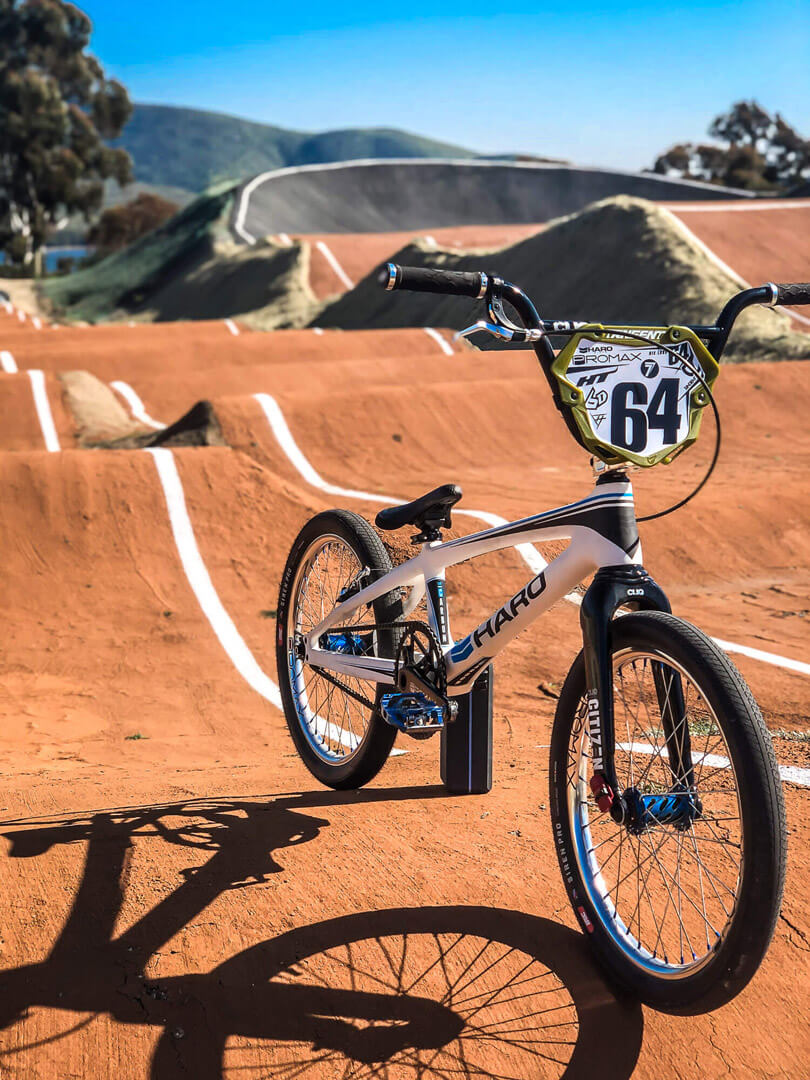