It’s only been a few weeks since we first talked to Payton Ridenour for this interview, she had just won the Jr. Women’s USA Cycling National Championships in Houston, Texas and was leaning into a busy year on the bike, one where the UCI World Championships would return to her home country … but the world has changed a lot in the last few weeks … 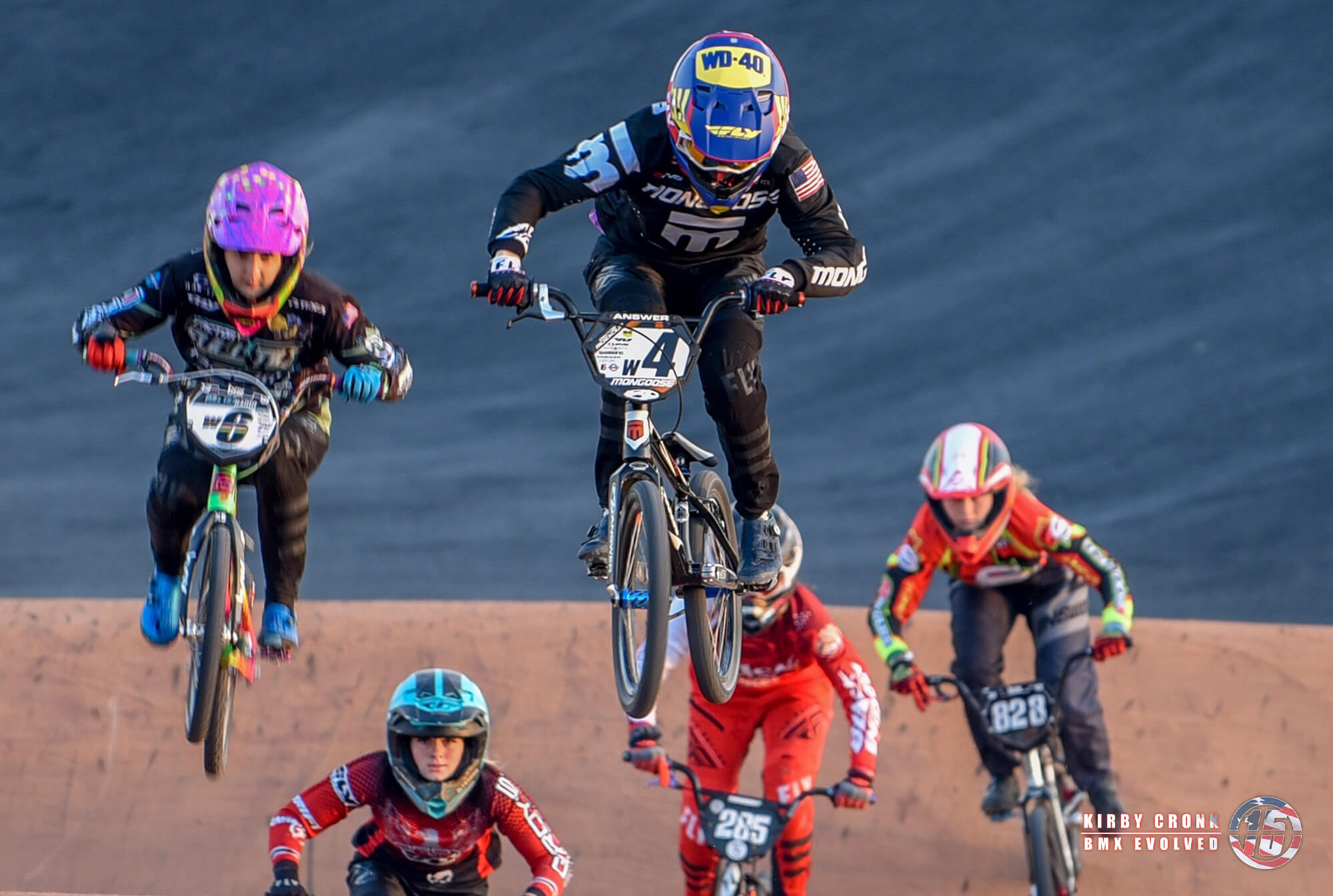 Payton’s first year with her new Team, Mongoose, has momentarily stalled with the onset of the Coronavirus but, as we’ve mentioned, it did get off to an excellent, if early, start in Texas, winning her first National Sleeve … ‘I’m not used to riding that early in the year since I’m from the northeast, so I only get track time when I go to the nationals. I was definitely a little sketchy out there, but I still pulled off the win. It was a great day overall’ … ‘I’ve been wanting the sleeve on my jersey for a while now, and I couldn’t be more stoked to run it. I have new jerseys that Potter Racing is working on at the moment, and I can’t wait to debut them! They’re going to look great with the new WD-40 helmet!’

It may be a while before we get to see that new jersey on the track but Payton, as always, is facing into this time of uncertainty with a positive attitude and probably a headache as she resorts to hitting herself in the face with rakes in a bizarre attempt to entertain us all. We really hope you caught that Instagram video (HERE)!

‘The whole situation with the virus is unexpected but everyone needs to make the best of it’, Payton told us, ‘luckily for me, not much has changed except for the traveling aspect of things. We almost always cook at home, one setback was that the grocery store was out of chicken for the past two weeks, so we couldn’t make the chicken enchiladas I’ve been craving hahaha. My family and I usually spend a lot of time together, and I’ve been keeping up my studies, as I’m finishing up my senior year of high school.’ 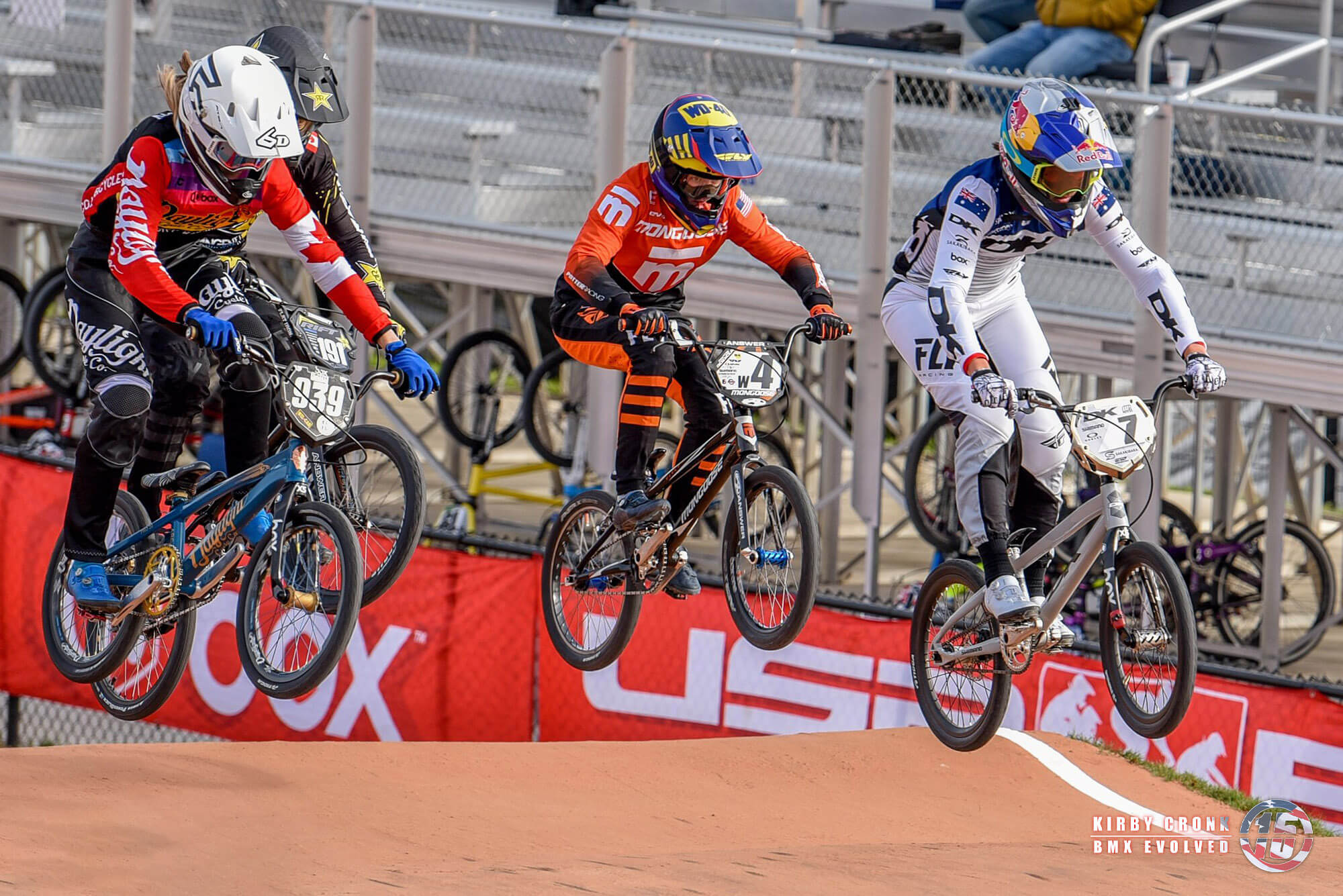 Regardless of the pending Zombie Apocalypse, we’ve been impressed with Payton’s fun-loving attitude towards BMX for a while now, she, and the rest of the Jr. Women’s class to be fair, are out there, loving life, regardless of the results on the day … there’s a lesson in there for the rest of us. It’s that attitude, along with the bike skills, obviously, that drew the attention of Mongoose … ‘We actually talked to Justin (Posey) and wanted him to play a big role in picking his teammates, and Payton was one of his first choices. Obviously seeing her skills on the bike was a no brainer, but also her great attitude off the bike is what sealed the deal! She is a perfect representative for the brand and BMX racing!’, Leigh Ramsdell, the Mongoose Team Manager, told us, ‘Payton is a great role model on and off the bike. Besides the obvious of her winning races against top competition on our Title Elite frame, she’ll also be inspiring young kids to pick up cycling through her work visiting schools with the USA BMX Foundation’.  The Mongoose philosophy will fit perfectly with Payton’s fun-loving attitude … ‘It was important that her transition to Mongoose was seamless’, Leigh continued, ‘and that our support would allow her to do what she loves without any added pressure to win. Above all, BMX is fun and being a Mongoose athlete comes with perks!’

It was Posey who ultimately reached out to Payton with the Mongoose offer, and she jumped on it, ‘there was no way I was going to turn down the opportunity to be on a great program surrounded with awesome people!’ 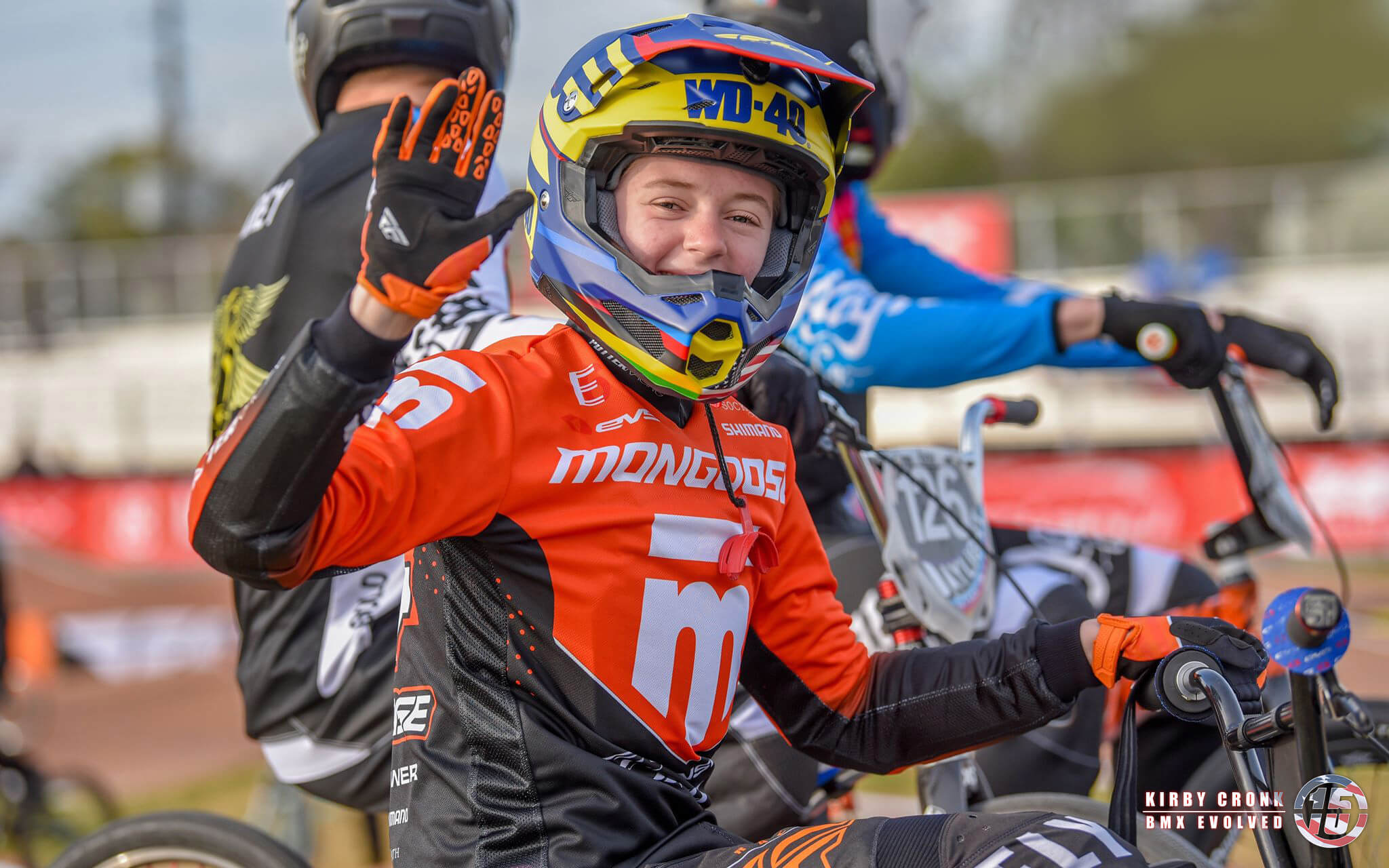 After her commanding performance in Houston at the National Championships, Payton was obviously in a good position going into the scheduled World Championships this May.  Last year, she left Zolder with the W4 on her back, but in Houston, on home soil, on a track she knows very well, Payton had to be a favourite, maybe the favourite … ‘it’ll be a lot more familiar than Zolder. I would say my biggest competition is my good friend Agus Cavalli from Argentina. She was really fast at Worlds last year, but I wouldn’t count anybody out … it’s a long track with a wide open first straight, which will make for some good racing! I think the track could flow a little better for sure, only because I’m hanging on for dear life on the triple into the second turn hahaha.’ Unfortunately, the event, as you all know, has been postponed and at the time of writing no alternative date, if there is to be one, has been announced.

Besides the W4 on her back, Payton is the first woman to earn the UCI Rainbow Stripes at the Red Bull Pump Track World Championships which was held in Switzerland last year, although she admits she wasn’t expecting to win …‘I expected to make it pretty far since I knew I was fast on the pump tracks but I didn’t expect to win. I was stoked to just qualify for the worlds and compete, let alone win the whole event! I did no specific training for it and raced in jeans and a long sleeve shirt haha. Switzerland was by far the coolest trip I’ve ever been on’ … ‘it’s definitely more laid back than the racing scene. Since everyone is from different disciplines you get to meet people from all types of cycling. It’s super cool that you have a bunch in common with everyone yet have different backgrounds.

One of Payton’s major goals this year, if the Coronavirus allows, is to defend that Red Bull Pump Track title, although she tells us that there is still no specific training on the cards despite being the one to beat this year… ‘I don’t do any specific training for pump track, but if there’s one along the way of places I go to ride for BMX I’ll hit it up to keep me sharp’. The pump track in her back yard probably doesn’t hurt though, … ‘I do have a four straight pump track in my backyard that my dad and I have been getting running early this year with all the extra time at home. Life is good at my house!’. 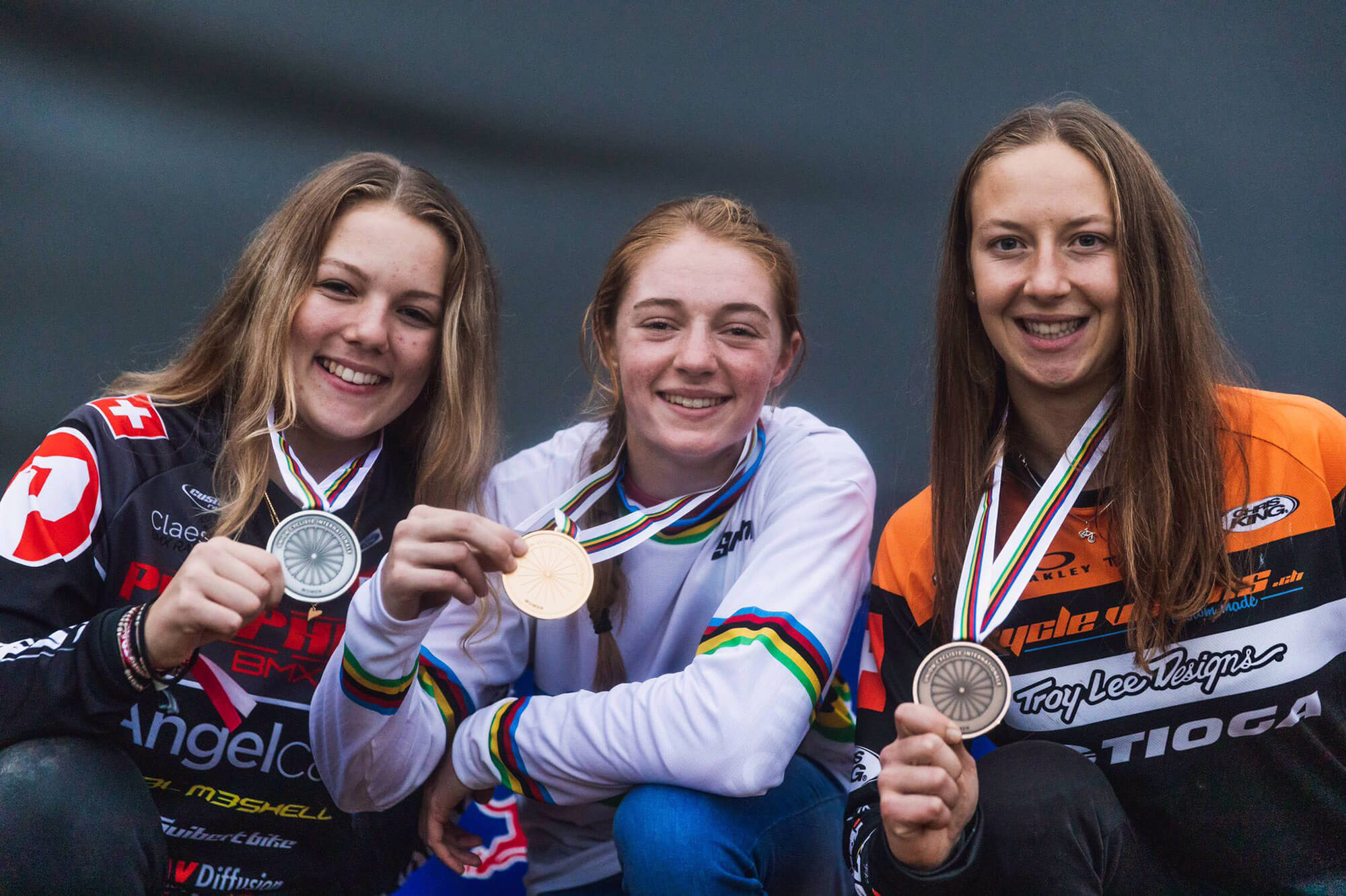 With only two years allowed in the UCI Junior classes, the worldwide Covid-19 pandemic and all the race cancellations it’s left in its wake are not helping Payton’s main ambition for 2020, her last roll of the dice in Jr. Women … ‘my main goal for this year is/was to earn my first BMX world championship title in Houston’ … unfortunately, that is looking less and less likely, but hopefully we’ll be proved wrong!

2021 will be all about Elite Women for the girl from Pottstown, Pennsylvania, although she’s already experienced the top level at some UCI Supercross World Cups, the latest of which was down in Australia. ‘I had such an amazing time in Australia! Everyone on Team USA is always so on top of everything and I couldn’t appreciate it enough. Also, getting to hang out and race against people who I look up to is one of the best parts’ … ‘I’m super stoked to keep growing as a rider and person while racing alongside the best of the best! The Elite women are definitely more aggressive on the track compared to the juniors. It’s a different kind of riding style racing against the big girls. Also, everyone seems to be not as sketchy and stay straight, so that’s a plus hahaha.’ 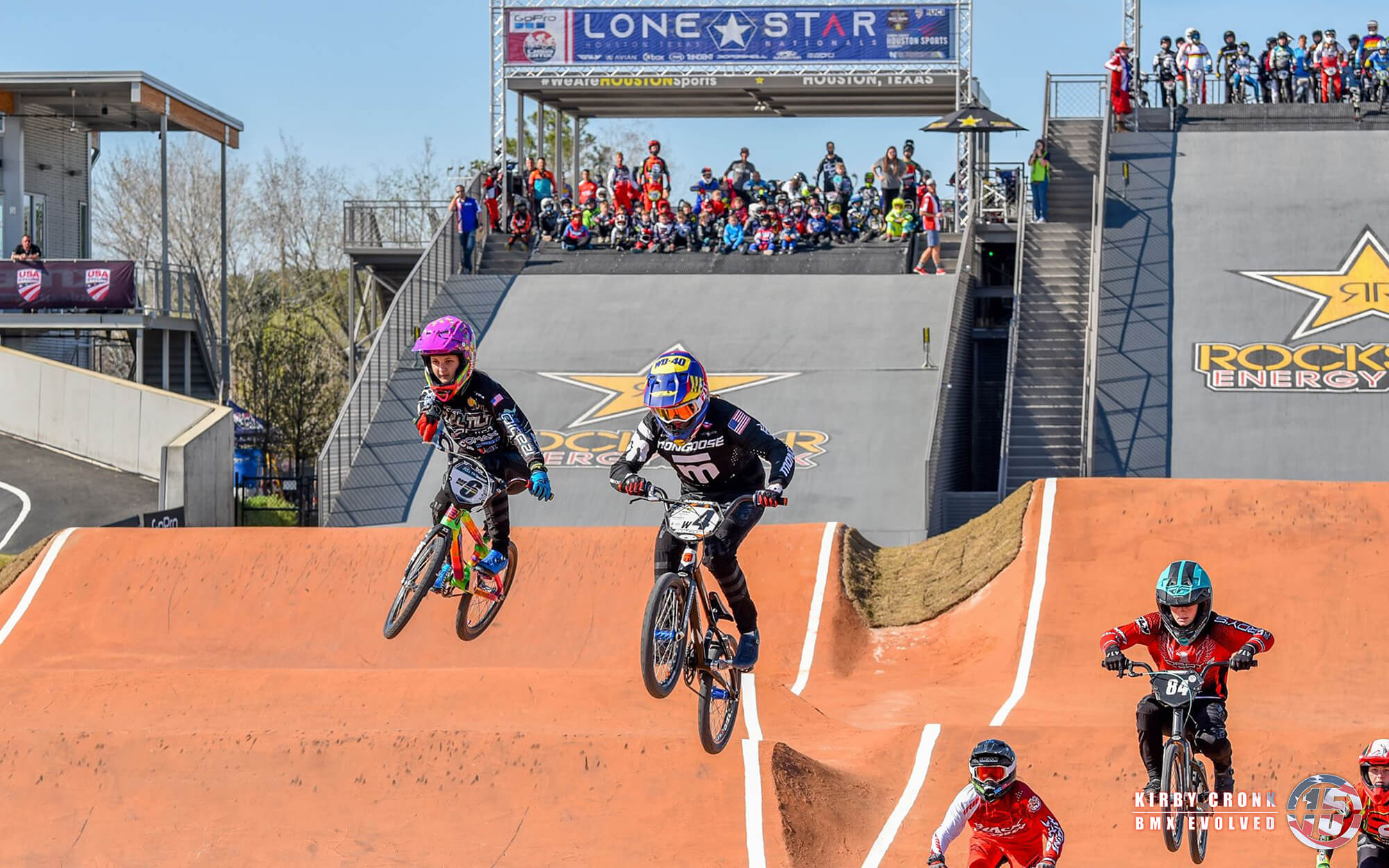 Looking further into her future, the new Mongoose signing has one eye on a trip to the City of Lights … ‘My dream has always been to compete in the Olympics, and Paris 2024 seems like a great goal for that!’, and she acknowledges that that may require a relocation for training opportunities … ‘I’m sure I’ll end up moving to the west coast to train there. There are a lot more training opportunities out west compared to where I live, where the weather isn’t good year-round. With the support of my mom, my dad, coach Arielle, and all my sponsors, it’s going to be a great journey!’, she told us.

For right now, in our current world, Payton will have to make do with preparing at home for the next race, wherever and whenever that may be, as well as her continuing goal to prove to coach Arielle Martin that her skipping is up to par … ‘being stuck at home is just an extension of winter training for me. I’m lucky enough to have a gate in my driveway, a full gym in my garage, and a road beside my house to do sprints’ … ‘I’m definitely bummed about worlds being postponed, but it’s for the best and hopefully everything can clear up soon. For now, I’m just keeping it fun and getting creative until it’s time to race! 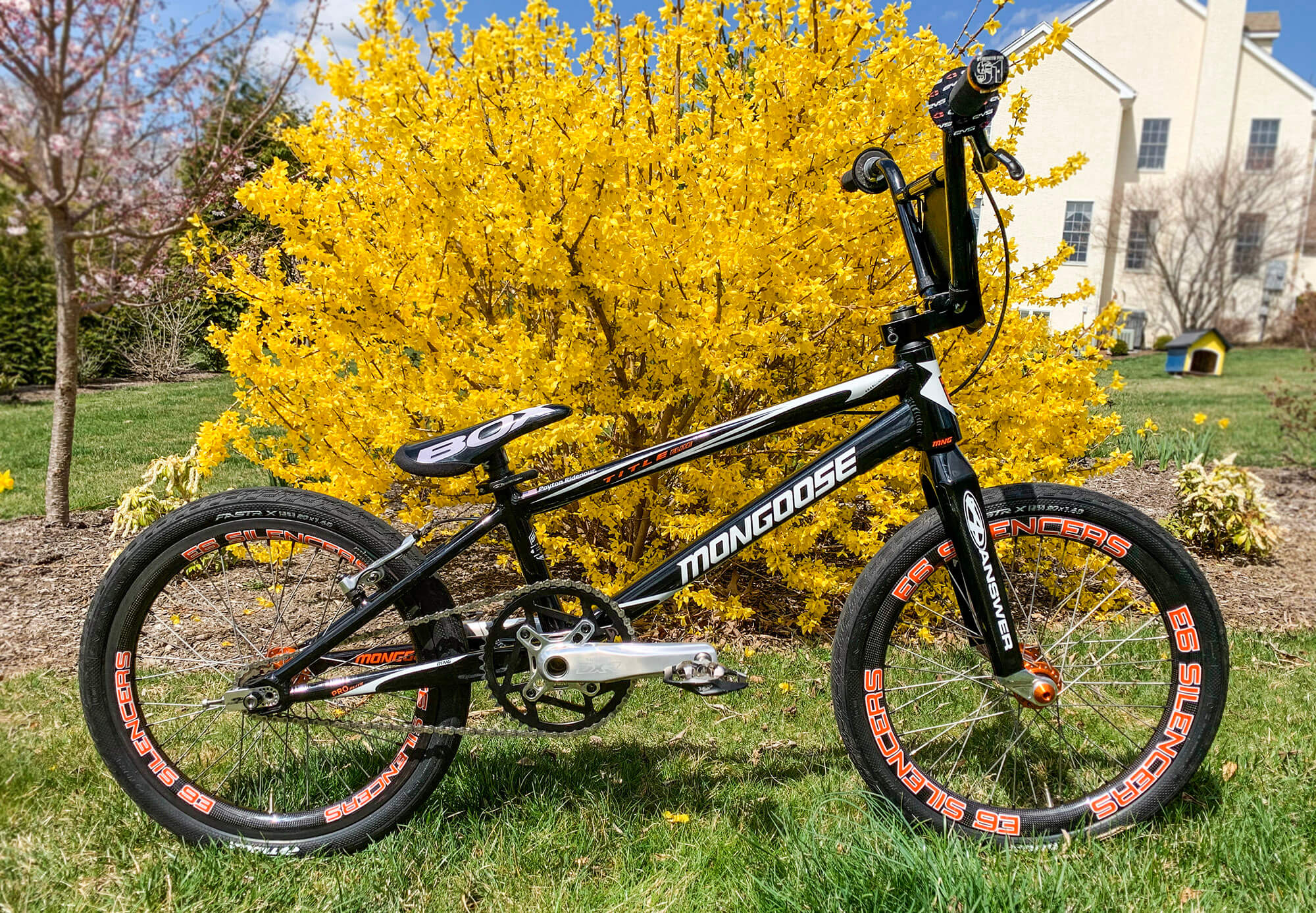