We catch up with one of the fastest women on the planet, Simone Christensen, to get her opinion on the Tokyo 2020 track …

We catch up with one of the fastest women on the planet, Simone Christensen, to get her opinion on the Tokyo 2020 track …

Since the ‘Ready, Steady, Tokyo’ test event a couple of weeks ago, we’ve heard a lot of feedback on the track. Some of the Elite Men liked it, some not so much … we’ve talked to the designers and builders, ProTracks, we’ve heard from National Coaches, but we’ve not heard much from the Elite Women, until now. Denmark’s Simone Christensen recently took some time out from her post ‘Olympic Test Event’ vacation and gave us an insight to her thoughts on the Tokyo 2020 Olympic track …

‘My thoughts about the track changed a lot over the week. My first session there, I thought it was so cool. I really liked the second straight, since us girls could either send the triples or keep it simple. The third straight was difficult to get a flow, but still fun, a bit like trails. But even from the practice, I knew it would be difficult to do a good lap. We did a few double straight efforts, and it was difficult getting it smooth every time’, Simone told us. Despite some slight trepidation and a ‘complaining kind of mood’ from some during practice, Simone when into the race event with a positive attitude, ‘probably more positive than a lot of the other girls did. But even though I was positive towards the track, it didn’t change the fact that it was really difficult racing on! It’s a track where you have to work so hard for speed, and still you didn’t get much, so the racing ended up being this pumping through kind of racing’.

‘I do really like the outline of the track’ she said, ‘and I don’t think it’s far from being a great racetrack. The first straight is good, you both get rewarded for horsepower and the ability to drive speed on the jumps. I personally think the second straight, for us girls, is good, it’s so nice not having to worry about getting pushed out to the pro section’. ProTracks had implied the same thing when we spoke to them, wanting to see elbow to elbow racing from the women out of turn one.

While Simone is somewhat a fan of the third straight split, especially for the girls, it’s here where she thinks the track could see some improvements ‘The lips are steep, with some decent sized jumps, so it just kills your speed. I like how it’s very important to be precise on the jumps to get through, but it’s just too hard to keep the flow. If maybe they lowered the first jump, so you could gain some extra speed on that one and also made the lips a bit less steep. Not sure if it would fix the problem, but the straight just kills our speed’. If the third straight remains as is, she is convinced it will not be good for racing … ‘in racing it just doesn’t work, because you can’t be making moves or trying different lines in the corner, because you need the speed out of the corner to get through the straight.’ 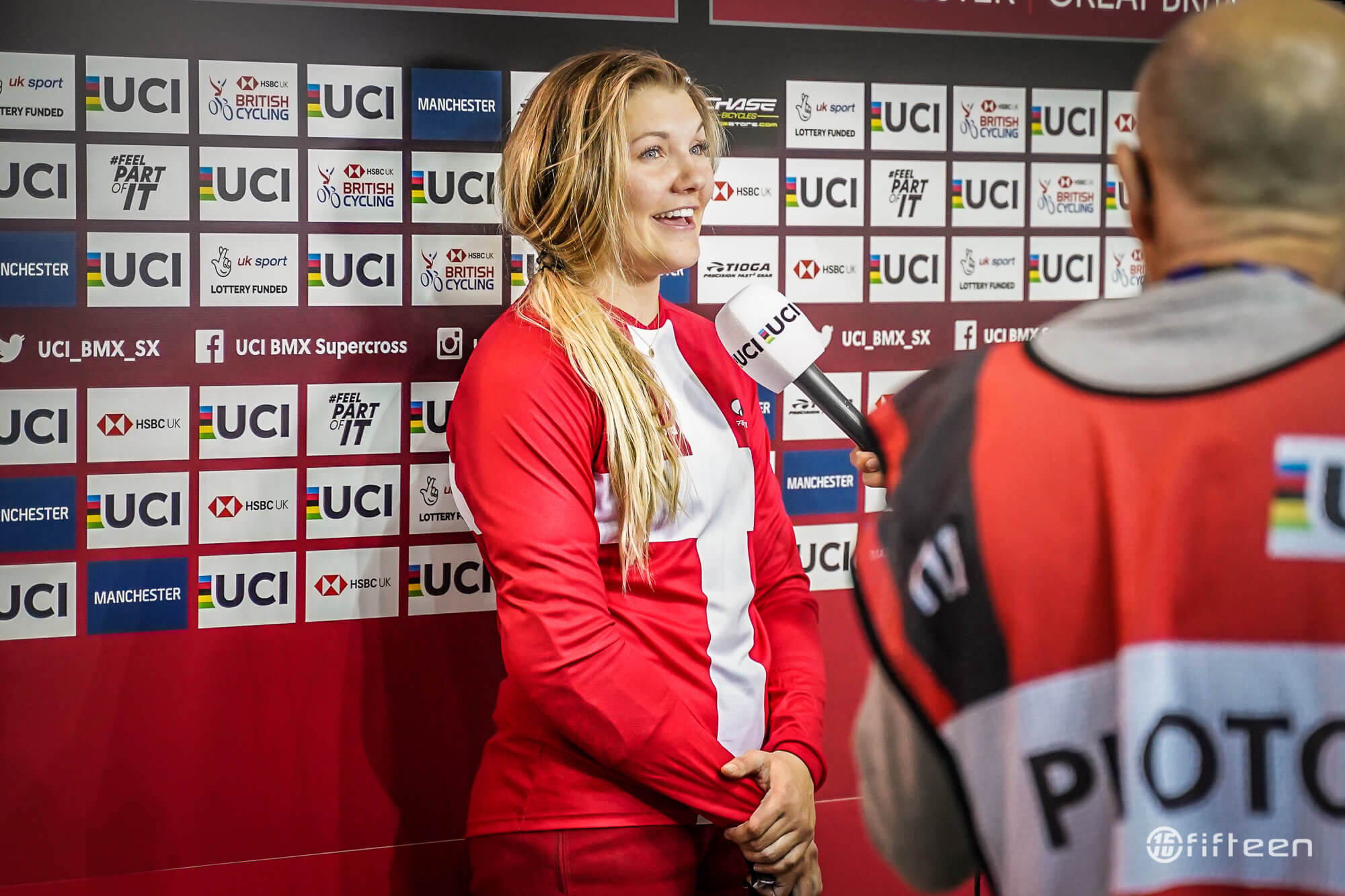 Simone see’s the draining 50 second lap in Tokyo as an issue, not just for the legs of the women but also for the sport in general. ‘The Test Event showed that it was pretty important to be out in front, and to try to stay smooth. If not, you would end up with battling people, and not having the speed to actually show any skills, especially on the third straight, and nobody wants to show our sport like that’ … ‘the length of the track just makes it so much worse, when there’s no free speed anywhere. If they somehow could change that, I think the length would be okay. And then, I think we will have some good racing next year on the big stage!’. If no changes are mad by the time the Olympics roll around next July, Simone is concerned that ‘our sport will look a bit stupid, for us girls at least. If only maybe 4 out of 8 get through the third straight, it will just look bad for the sport. If you don’t know BMX and you are watching that, I’m sure you’ll sit and think’ why are they are even at the Olympics if they can’t get through the track. Imagine watching athletic hurdle jumpers and half of the heat hit all the hurdles … It’s all about making it a track that’s challenging but not impossible to get through. But I understand this is easier said than done …