Latvia’s Vineta Pētersone has finished up an amazing final year in Jr. Women … UEC European Cup overall #1, European Championships #2 and UCI World #3 … and to top it all off, she spends a lot of time here in Ireland. It was about time we had a chat …

15: Let’s start at the most important day of your BMX career … the day you arrived at Lucan BMX in Ireland 😊! You have been here a bunch of times now, what’s the connection? Do you like it here, are the tracks up to scratch?

Vineta: Oh yes, I like this place. The track in Lucan is good, well designed and always in rideable condition. Thumbs up to that, for sure! Since my first visit I’ve got to know some of club members and they are always friendly.

15: We remember looking at you ride the Lucan track the first time you arrived thinking who is this Latvian girl who just arrived and can jump everything … that was before you turned Jr. Elite right? If memory serves, you had been off the bike for quite a while with injury but had had a pretty successful amateur career up to that point … give us some of your big results before the jump to Junior.

Vineta:  I remembered that, one of my first times in Ireland, I was probably only 14 at that time. The track is fun so after my liver injury it was a nice place to get back on my bike.

15: How did you get involved in racing BMX?

Vineta:  I grew up by the track with my brother, five years older than me, who is professional MTB XCO rider at the moment. At first riding with my little bike next to the track until the next moment when I’m racing World Cups across the world. My first race was probably around the age of 4. Step by step I’ve been getting good results since I started and now I have grown into Elite.

15: Was there any riders in particular you looked up to when you were starting out?

Vineta: Not really, and I still don’t. Although I do admire all top athletes, can’t name any one in particularly though …

‘… a really strong will to be the best, persistence is the key’

15: Obviously Latvia has a very successful BMX program for such a small population, what do you think is at the root of that? What could other small countries, like Ireland, learn from you guys?

Vineta: First of all, its enthusiasm. Until the professional level is reached its totally a family sport. That’s how we all started, just traveling around Europe in cars together … they are some of my best memories of races. After that comes  a really strong will to be the best, persistence is the key.

15: You’re clearly very comfortable on Supercross tracks and we guess that’s where your future lies … but given the choice are you going to ride an SX or more traditional track tomorrow?

Vineta: Jumping into the juniors was massive change compared to challenge class, I guess that’s why I messed up at my first junior year. Riding regular tracks at challenge age I was used to that and I had a profound skill for things that I have been doing for years. When I got into the juniors there were problems, I realized it’s not just a talent but long-time work to earn that skill.

So, do I like them now? Maybe, I think I’m getting used to it.

Riding with eight people side by side you can easily lose your only chance, because on an SX track there is no second chance. If you get squeezed somewhere and you’re not able to jump afterwards your run is over. On regular tracks its different, you can see good come backs for a lot of situations.

15:  What has been your favorite track you’ve ridden (no pressure to say Lucan BMX 😊)… are there any you just don’t like?

Vineta: I think there’s many I could name, Lucan is for sure one of them. I want to highlight the track in Latvia, Valmiera BMX track, in my view is definitely the most versatile I have ever been on. It has two starting hills, a small one and 8m, it is possible to use it for small technical tasks as well as for jumping and racing. 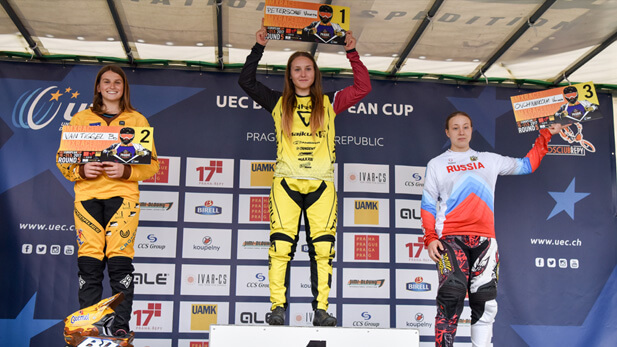 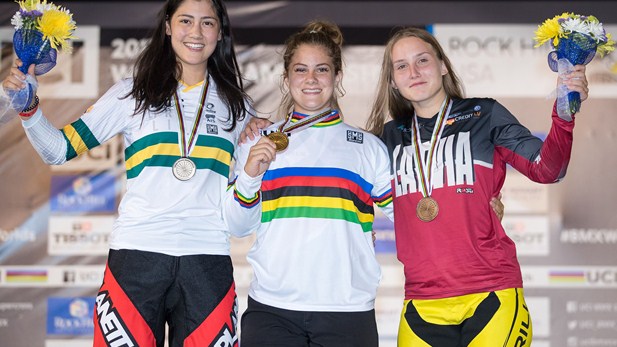 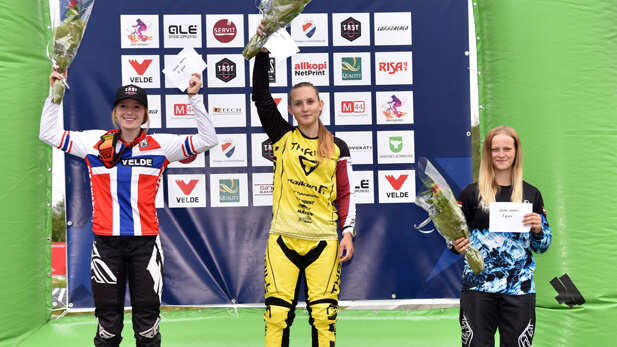 15: You have spent a lot of time at the UCI World Cycling Centre in Switzerland recently, what are the facilities like there, who are you riding with, which coaches are you working with … are you enjoying it?

Vineta: That’s true, it all started in autumn of 2016 when I attended the ‘Talent ID Camp’. This season a bunch of us got ready for Worlds there. Hatakeyama and Strazdiņš were also there, so we had some good riders.

The facility there is incredible, as an athlete I had everything I needed. Thanks a lot to UCI WCC center for taking us, it was a great experience and I’m looking forward to going there again. Recently I attended the second ‘ID Camp’ for little sneak peek to see what to expect in March for next season.

15: Your two years in Jr. Women has been very successful in arguably the strongest field in a while, Davis, Shriever, Sakakibara to name but a few … European Cup #1, E2 and W3 plates just off the top of my head … you must be happy with that?

Vineta:  This season was incredibly good and I’m super happy with how it went. I achieved high results in all of the main events. I would say I was more struggling with myself throughout the season, looking for ways to improve any little problems … there were some ups and downs. I finished the season having  National, European and World medals as well the Euro Cup overall win, plus 11th in the UCI Elite World Cup overall is just unbelievable.

15: Are all the top ladies in Jr. Women moving to Elite in 2018? Do you think you guys can make a dent in the class in your first couple of years?

Vineta:  Yes, and we already have had a little insight into Elite level at the World Cups, so as we can see some of us already can make mains and podiums in that class. All I hope is that I will join them for that.

15: You’ve raced some UCI World Cups now … how big is the jump in speed from Jr. to Elite in your experience?

Vineta:  Girls are more equal and the results are denser. The difference between being in a semifinal or in final is quite small, also, the desire to win is pushing girls to new speeds and a different racing level. It looks that the top Elite Women we have at the moment are still increasing their abilities so I would say that most of them will stay and we just gonna need to work twice as hard to catch them.

15: You have just gotten back from the last UCI SX round of the year in Argentina. What was that experience like, happy with how it went?

Vineta: The race was great, maybe I wasn’t that happy about my first day but 10th place on the second day satisfied me for sure! I stepped up in the SX ranking to 11th place and finish 1st as junior overall.

15: The new IOC ‘gender equality initiative’ which gives women 24 places in Tokyo, will probably really help out the smaller countries qualify for Tokyo (although we’ll have to wait for the official qualification path from the UCI) … are the Tokyo games the goal now?

Vineta: Exactly, we need to see the qualification path. If it does help smaller countries that would be good benefit. I assume that up until the Olympics the amount of women at the highest level will increase and women’s BMX will be pushed to next level.  If everything turns out well I hope to see my name on that 24-woman list.

15: Ski season is almost upon us … it’s Cross Country your involved with, right? Do you do it competitively or just for fun?

Vineta: I also started Cross Country when I was little, but now, in the last few years, it’s more of a hobby. BMX is taking more time ever year, season are getting longer, they start earlier and end later so it seems that the skis will take second place. I have completed in some Words Championships in Elite and Jr. group and was the National Champion enough times in youth. I think my peak was before 2014 Olympic games when I was a candidate for the games.

15: What are your race plans for 2018 … can we expect you back in Ireland at some point? Can we persuade you to do a clinic or two?

Vineta: My plans for next season … I will try to make my way in Elite by attending the UEC European and UCI World Cup rounds, and at the same time looking forward to seeing the Olympic criteria. This year’s session was supposed to end after Argentina but my plans changed, after that was UCI WCC Camp. Now I’ll spend some time in Ireland, so for sure we can talk about some clinics …